'I believe that if I pass away, I’ll be with my son. If I don’t, I’ll get to live the rest of my life,' said brave Cassie 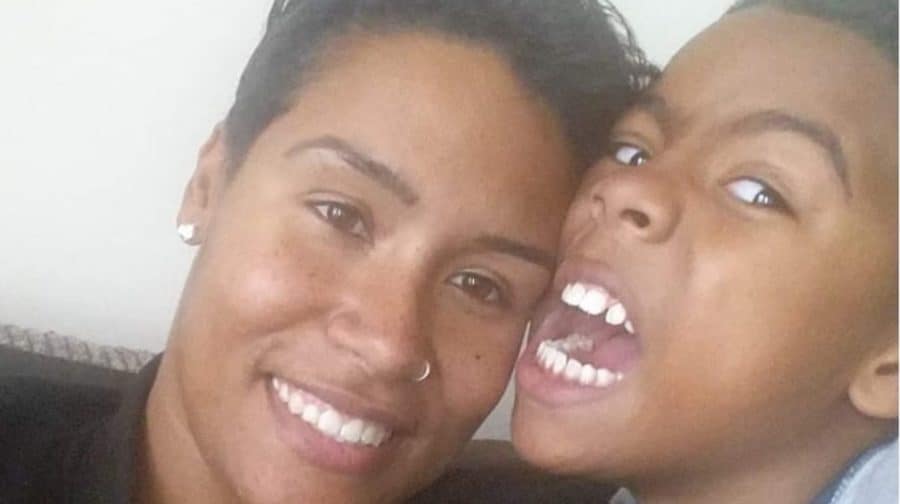 Doting Cassie, pictured with her son Kye. who tragically passed away from cancer aged just nine-years-old

A charity football match tomorrow will raise money for a “brave” woman facing terminal cancer to complete her bucket list – less than two years after tragically losing her nine-year-old son to the illness.

The fundraising match, between Sunday league teams Peckham Rye FC and Villacourt Rovers, will be held at St Pauls stadium on Rotherhithe’s Salter Road tomorrow in Cassie Dore’s name, after her emotional story touched the hearts of the teams’ players.

Cassie, from Bedford, has suffered multiple diagnoses of cancer, alongside losing her little boy, Kye, to the illness.

She has shared her heart-breaking journey in a video on the Peckham Rye FC’s YouTube channel ahead of ‘Cassie’s I’ll Live Forever’ match at 10am on Sunday, August 24.

WATCH: Cassie’s heart-breaking story in her own words

‘Bubbly’ and ‘active’ Cassie first discovered she had the condition when working as an opticians in Boots in 2011. She applied for a course in Midwifery, but just weeks before she was due to start, was diagnosed with cancer in her left breast.

She had three tumours, doctors discovered – one the size of her son’s fist.

Her left breast was removed, and she had chemo and radiotherapy.

But a week before she was due to have reconstruction in her left breast, she was diagnosed with cancer in her right breast, which also had to be removed.

“In the end I eventually had reconstruction. I was so happy. In my son’s words, I was a ‘mummy again’ because I had hair and breasts again – which I thought was really rude, but it was alright!” laughed the 31-year-old.

Feeling fit and healthy once more, Cassie applied for her Midwifery course a second time – only for tragedy to strike again weeks before she was due to start.

“It was only a little nodule … but they said we can’t really do anything this time,” she said. “They said ‘we have to leave it and see what happens.’”

Two years passed, she said, while she continued to live her life as normally as possible.

But one day, while Cassie was in staying in hospital overnight, her little boy was taken ill while staying at her mother’s house. “She said, he was having a seizure and frothing out the mouth and bleeding out of his nose and his ears,” Cassie recounted.

Little Kye was rushed to hospital in Cambridge by ambulance for further tests and treatment.

“I just remember looking at him lying there lifeless on the other side of the ambulance and looking out the front and seeing all the traffic moving,” she recalled.

Cassie’s nine-year-old boy had cancer in his brain, doctors found.

“They tried chemotherapy, but it didn’t work at all. They told us he was going to die. We chose not to tell him,” she said.

Her little boy sadly passed away at a children’s hospice in Luton on November 3, 2017 at 11.52am surrounded by family, added the tearful doting mum.

“I didn’t cry that day,” she said through tears. “It took two days or so, I don’t know why, it wouldn’t come out.”

Months after her son’s tragic passing-away, doctors removed the lump left beforehand two years ago, and a course of radiotherapy got rid of it.

But in yet another devastating development, this year the courageous 31-year-old discovered a lump a few days before a check-up – and tests revealed cancer had spread to her lungs and breastbone. Money raised will go towards Cassie to complete a bucket-list

“I’m not totally religious but I believe that if I pass away, I’ll be with my son. If I don’t, I’ll get to live the rest of my life,” she said. “I don’t have anything to lose.”

Money raised by the game and the fundraiser will go towards helping Cassie achieve her ‘bucket-list’ this summer, and players are hoping to have her at the match if she is well enough.

“Cassie has become close to our hearts, and a member of the team, and we’d like to do everything we can so she can do her bucket-list and bring awareness to her story,” added a Peckham Rye FC member.

If you want to donate to the GoFundMe for Cassie’s bucket-list this summer, you can find it here.

Doors open tomorrow at 10am, with the match commencing at 11am.

Tickets are £5 and all proceeds will go towards Cassie’s bucket-list said Peckham Rye FC.