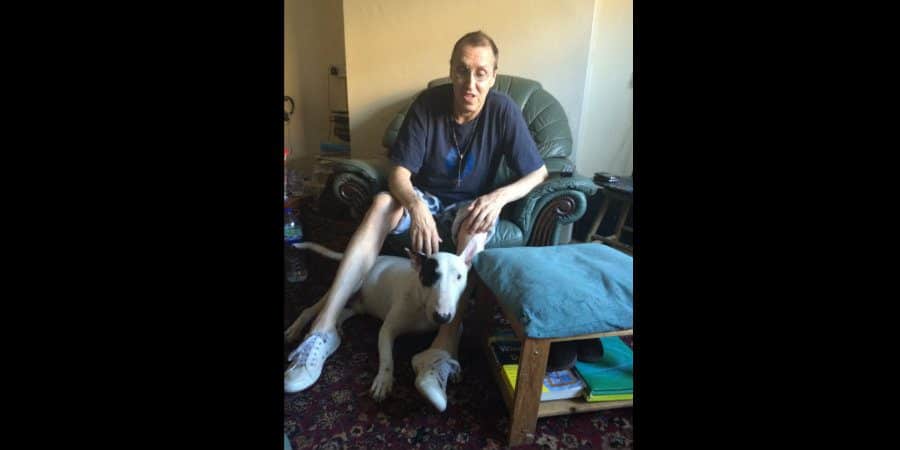 Tributes have been paid to a Peckham man known as a friendly face to the area’s dog walkers, but who recently died after a battle with cancer.

Lynne Mckeon, a friend of Mr Clark, has told the News he was greatly comforted in his last days by having a framed pictured of his beloved English Bull Terrier, Benson, at his bedside.

Benson, who Lynne says was Mr Clark’s “best friend in the world” sadly died in October, but will go down in Peckham history for winning the Golden Oldie prize at the ‘Peckham Rye Fun Dog Show.

“The bond between Gary and Benson was unbreakable,” Lynn said.

“Gary and Benson were very well known at Peckham Rye Park where they walked together every day.

“I got to know him from walking my Rhodesian Ridgeback, Zampa, and stopping to talk to him every time. Zampa and Benson actually became best buds when they both won prizes at the dog show.

“He was such a kind and caring person and would always help others whenever he could. I took the photo of Benson to the hospice for Gary and it gave him such a lift. Fifty-three was no age to die.”

Mr Clark was also known to have worked as a builder, but had been training in acupuncture before his disease got the better of him.

Lynne and two of friends of Mr Clark, Rose Faulkner and Jacqui Gleeson, are organising a memorial service to take place on Tuesday, March 8 – which would have been Mr Clark’s 54th birthday.

The service at the All Saints Church in Blenheim Grove will begin at 1.30pm, and the three plan to release 54 balloons into the air as a special tribute.

“Each balloon is going to have a personal, handwritten message from each person who loved Gary, then we will set them free into the sky,” Lynne said.