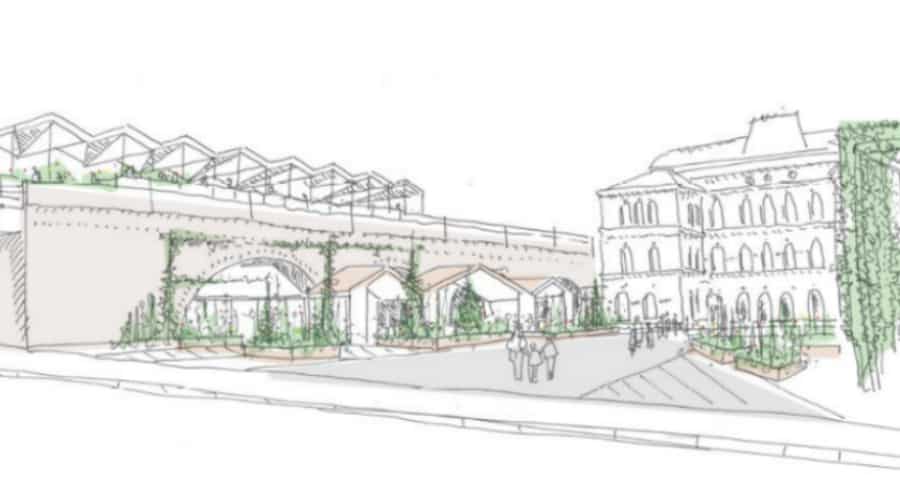 A new design for Peckham Rye station square has been revealed after previous proposals went off the rails last year.

The proposal, including a tropical roof garden and large rusted metal planters, were divulged at a community meeting last week to mixed reviews.

The design, by Landholt and Brown Architects, will open up the front of the historic station by removing the arcade which currently houses TSB bank, Jenny’s café and several small businesses.

Barry Jenkins, of Barry’s Café next to the station, said the designs were “on the right track” but remains concerned at who will maintain the large zig-zag shape planters in the new square. “The devil is in the detail,” he said, “You’ve only got to look at how Southwark maintains everything now.”

Derek Kinrade, of the Peckham Society, said he was “delighted” to see an open square, harking back to the station’s original 1800s surroundings.

“But I’m distinctly worried it looks as though it’s going to be filled up with clutter,” said Derek, referring to the planters, stalls and seats planned for the square. Mickey Smith, who resurrected the now thriving Bussey Building said it was a “good plan” but hoped there would be scope for more than the one bar currently proposed in the design.

“That’s what makes a great atmosphere when you arrive and makes you feel safe,” said Mickey, who is still planning to open a new Hollywood golden-era inspired cocktail lounge in the top floor of the doomed arcade building.

Resident of nearby Highshore Road, Michelle Male Shaw, who recently received a standing ovation for fighting to protect Rye Lane from over-development, said she was “really disappointed” by the plans as she was hoping to see a more simplistic design dotted with trees. “I wanted it to be more open and less restrictive,” said Michelle, who also wanted to see the murals around Peckham incorporated into the design to reflect the colourful diversity of the area. “That to me is Peckham,” she said. “This reminds me more of Canary Wharf.”

Plans for a £25million revamp of the station, which involved bulldozing businesses and building flats, were halted in the face of huge public opposition early last year. Since then the council launched a ‘co-design’ process to ask the community what they would like to see outside the area’s architectural showpiece.

Peckham Vision campaigner, Eileen Conn, who originally spearheaded the grass roots campaign to open up the square, said she felt “side-lined” from an “alleged co-design process,” which she said was epitomised by the meeting on Wednesday last week in which a lengthy presentation by the architect was followed by a short time in which to respond to set questions.

“It is a significant missed opportunity. And it would be seriously disingenuous for the council or the architects to encourage anyone to think that this is a serious collaborative process,” she said.

Southwark’s cabinet member for regeneration and new homes, Mark Williams, said he had very positive feedback from people at the meeting. “I’m really excited to see the plans to create a new square outside Peckham Rye station, but more importantly it seems local residents are really pleased with them too,” he said.

“At the co-design meeting there was support for the plans from many residents and businesses, which was wonderful. I believe the scheme Landholt and Brown Architects have designed is exceptional, and demonstrates the positive involvement of local people through the co-design process. It really reflects Peckham’s diversity and unique character. After years of discussion we now have plans, supported by the community that will improve the area for everyone who visits, lives or works in Peckham.”

A planning application for the new square will be submitted in September with work to start in the summer next year. It is estimated that the scheme will take eighteen months to complete.