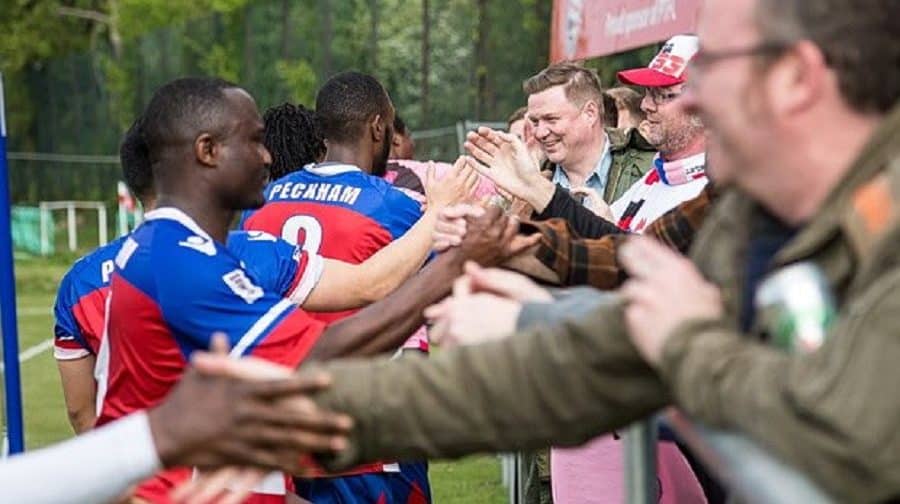 Peckham Town FC has welcomed Labour’s pledge to reform the football industry but says more can be done to support grassroots clubs.

This month Jeremy Corbyn has announced that his party would reform the football industry to move more power into supporters’ hands and redistribute a small percentage of profits made by the Premier League among local clubs.

The policy would see new legislation brought in to allow supporters’ trusts to buy shares when clubs change ownership, and give them the power to appoint at least two members to a club’s board of directors.

Five per cent of income from Premier League TV rights would be invested in local club facilities and teams, equivalent to £40 million a year.

Duncan Hart, from the volunteer-run Peckham Town FC, told the News the club welcomed “any move to enable more funds to trickle down from the Premier League” but said the reforms needed to go further.

“Too much money needs to be spent on items to meet FA tick-boxes that are often unnecessary for clubs at the 5th or 6th level of non-league,” he said.

“Fifty to 100 capacity seated stands are required, which is often over and above the number of people that wish to sit.

“This is great for stand manufacturers, but they often sit half empty when installed.

“It’s essential to ensure that limited funding is spent on items that really benefit clubs and supporters, and ensures a more inclusive environment.

“The funding also needs to be better aligned to when clubs need it.

“Peckham Town men’s team has not been able to gain promotion due to the difficulty of securing funding to undertake the developments required by the FA to enter the 6th level of non-league football.

“The cost of these upgrades far outstrips the £20k match-funding available for clubs at our level.

“Indeed, this funding is only available for changing room work, and not for ground upgrades, and this needs to be self-funded.

“The majority of teams in the Premier Division of the Kent County League do not even apply for promotion to the next level due to the difficulty of obtaining funding, and the overly stringent requirements.

“Additional funding is of course welcome, but this must be accompanied by a review of the system that allocates this funding, when it’s allocated and what it is spent on.”

Responding to the pledge, Helen Hayes, who played an instrumental role in campaigning for Dulwich Hamlet FC’s return to Champion Hill, said: “The Premier League is one of the lucrative profitable leagues in the world, yet keeps most of their profits for the wealthiest clubs in the country.

“Under Labour’s plans, this profit would be reinvested in grassroots clubs to help them improve crumbling facilities.

“Local teams are at the heart of our communities.”