‘Peckham’s biggest Elvis fan’ unveils his shrine to The King

Eddie Pardey has filled his home with memorabilia 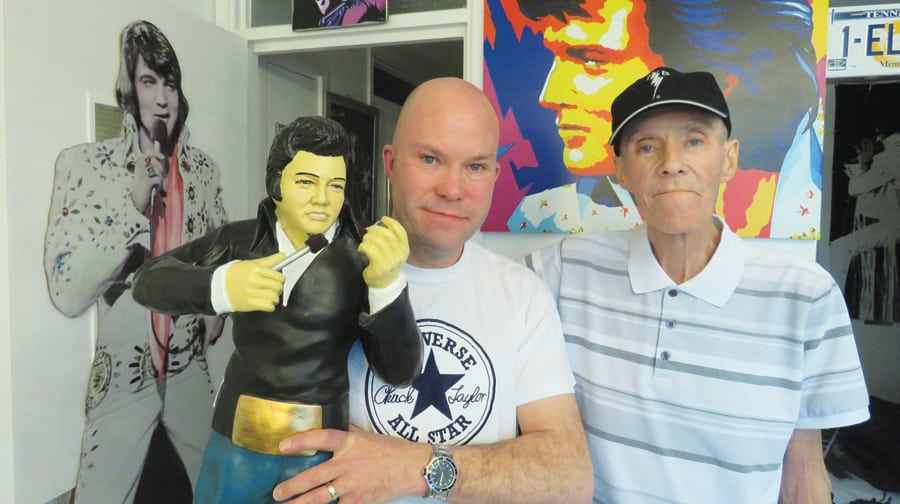 Eddie Pardey with his son Lee

A retired metal worker dubbed “Peckham’s biggest Elvis fan” has revealed his huge collection of Elvis Presley memorabilia – and his plans to leave it all to his family, writes Alex Daniel…

Eddie Pardey, 78, said his Peckham home was “a shrine to Elvis”, after filling it with records, artwork and figurines of the singer.

Mr Pardey was diagnosed with bowel cancer in October last year, but decided not to undergo treatment for the disease. He plans to leave the collection to his family, “so that it can be preserved for the future”.

His flat houses hundreds of records, figurines and art work, including a metal replica of Presley’s motorbike turned into a telephone set. Since his diagnosis, showing the collection to the world has become an ambition, having only shown close friends and family until now.

He said: “Only two or three people have seen it but I want people everywhere to see it. There are still a lot of old rock and rollers about who’d be interested in this stuff.” A neighbour, Margit Mulder, 48, said: “He’s absolutely obsessed with Elvis, definitely Peckham’s biggest Elvis fan.”

Mr Pardey began collecting Elvis records in the 1970s, but it was only when his wife, Jacqui Pardey, another big fan of The King, died 25 years ago that he decided to start a collection in earnest. He then set about asking friends and family for help in buying artworks, and still asks his sister to help source Presley-themed items on Facebook. He said of his flat: “It’s a shrine to Elvis, and to my wife who loved him too.”

He said he has always had a connection to Elvis, and that he loved that the star “could sing anything”. He recalled being hit especially hard when Presley died on August 16, 1977, Mr Pardey’s 38th birthday. “My wife came back and told me, it was awful. We stayed up until 4am that night listening to his music. It’s funny, he died on my birthday, and I have the same initials as him, E.P,” he said.

Mr Pardey has also tried his hand at being an Elvis impersonator, having produced a number of tapes of him covering Elvis songs, including the hit Always On My Mind.