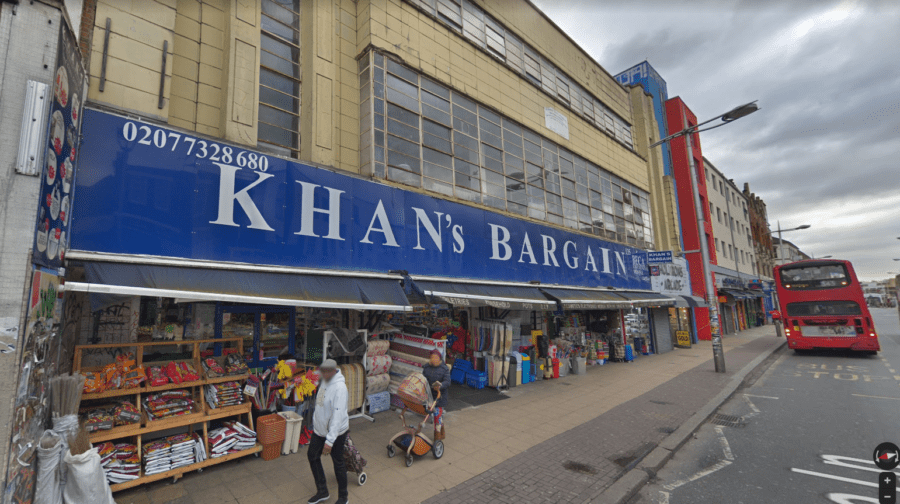 Khan’s Bargain and two of its employees were fined more than £3,000 after an underage knife sales sting.

A sixteen-year-old girl had been deployed by Southwark Council’s Trading Standards team, with an undercover police officer, to the famous shop at 135 Rye Lane in February of this year.

The court was told she was served by two members of staff without asking for ID or challenging her age, despite it being illegal to sell knives to anyone under eighteen.

Trading standards say during the sale, 24-year-old Mohammed Ismail Khan opened a locked cabinet of knives for the undercover police volunteer to choose from, while money was exchanged with Saidrazan Khan, aged 56, who was working at the till.  The case was taken to Camberwell Magistrates’ Court, where all pleaded guilty to selling the six-inch kitchen blade (pictured) to a child under eighteen in February of this year.

In total, the Peckham business and two staff members were fined a total of £3,610 – including costs and victim surcharge.

Cllr Victoria Mills, Cabinet Member for Finance, Performance and Brexit, said: “Unfortunately this trader fell foul of the standards expected and sold without taking any steps to check the age of the purchaser.

“We always want to work together with businesses to ensure they follow the best practice when stocking and selling knives but we will not hesitate to prosecute businesses that are falling short.”

This action funded by the Home Office, which awarded Southwark Council extra funds in response to its high levels of knife crime and the disproportionate impact on young people.

New figures analysed by the Chartered Trading Institute show that 160 knives were sold to volunteers as young as thirteen last year across London’s boroughs, with one in nine stores – and two in five online retailers – making an underage sale.

Fine not enough should get 5yrs as well, and shut the shop down.