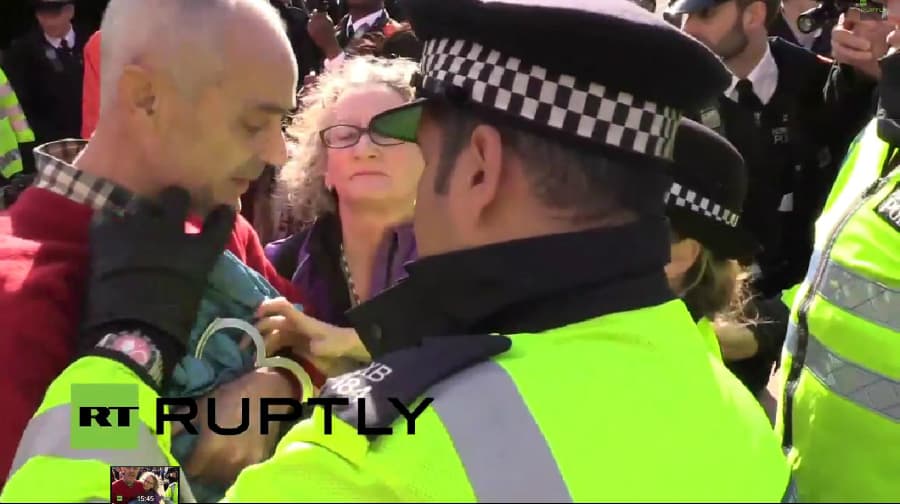 A claim an environmental campaigner assaulted a guard has been thrown out by a judge, who called the case a “waste of court time.”

Camberwell resident Donnachadh McCarthy had just started his testimony at Westminster Magistrate’s Court on Friday, when deputy district judge Claire Evans interrupted him to throw the case out.

The former deputy chairman of the Liberal Democrats stood charged with assaulting security guard Michael Swain, who had been on duty outside the House of Lords when Donnachadh was peacefully protesting against ‘cash for peerages’.

The 56-year-old was holding a placard which read, ‘Arrest Nick Clegg for selling stolen peerages’ when he himself was arrested for ‘shoving’ Mr Swain while he tried to caution another protester on December 20 last year.

As Judge Evans declared she was going to “stop this case right here,” she said: “I am entirely satisfied with the explanation that this was an accident – it’s even consistent with Mr Swain’s evidence – and I’m not prepared to waste any more court time,” before finding the defendant not guilty.

Donnachadh, of Coleman Road, who had always claimed he bumped into Mr Swain by accident, told the News he was “really relieved” to be cleared by the judge.

“It was eight months of stress, but I’m very relieved to have it all over,” he said, “but the political battle continues. I’m pleased if this case has raised the issue of the sale of peerages.”

In October last year, Donnachadh – an who writes a monthly environmental column for the News, was arrested while taking part in a peaceful ‘occupy’ demonstration in Parliament Square for being in ‘possession of a tarpaulin’. London Assembly Member and former Camberwell councillor, Jenny Jones, was also arrested for trying to intervene.

A video documenting the arrests shows four officers carrying Donnachadh to a police van in handcuffs surrounded by a protective shield of ten other officers, in a reaction he described at the time as “completely over the top.”

After three months he was charged with four counts relating to holding the piece of plastic in his arms, but all charges were later dropped.

Donnachadh, who says he now understands what it feels like to be treated like a criminal, has vowed to carry on opposing the practice of party donors being put forward for peerages.