Lil, 72, now struggles to get to the Dunton Road bus stop in time to catch the number 78 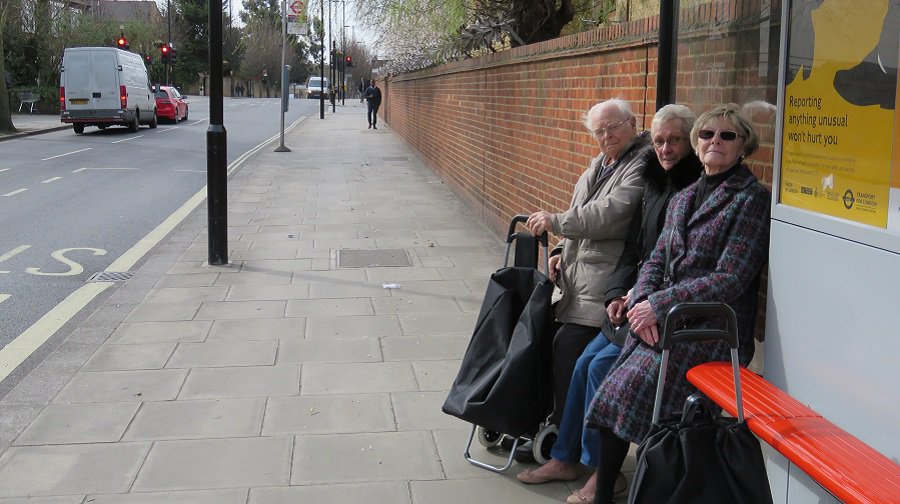 A great-grandmother and her friends have been left struggling to catch their regular bus after the shelter was moved 20 feet away from the actual stop.

Lil Hosier, 72, often catches the number 78 from a bus stop on Dunton Road, near Willow Walk, in Bermondsey, to go shopping with friends.

But the pensioner said she had recently experienced buses hurtling past before she even had time to get to her feet, after TfL decided to move the bus shelter 20 feet away from the  stop.

Lil said there used to be a bus shelter nearer the stop, but it was recently replaced with a new shelter set back from the pavement against a brick wall.

“I’ve been using this bus stop for ages but they moved the shelter about eight weeks ago,” said Lil, who suffers from osteoporosis.

“If you sit in the bus shelter you don’t see the bus coming. If you get up and put your hand out it goes straight past and doesn’t stop because you are at the shelter, but not the actual bus stop.

How the bus stop and shelter originally looked

“There are about two or three of us at a time who sit at the bus stop chatting and then the bus just goes past.”

Lil said she thought the bus stop itself would be moved to the same place as the shelter at first – but soon realised this would not be the case.

“I know TfL wants us pensioners to get up and moving, but to have to move 20 feet to get the bus means the bus just goes straight past.”

A spokesperson for TfL said: “We are very sorry to hear about this experience and we are trying to get the situation sorted out as quickly as possible.”