There’s more people in Southwark with jobs than ever before, as mayor visits new construction skills centre

New education centre on site of former Heygate Estate could see 1,000 trainees pass through every year 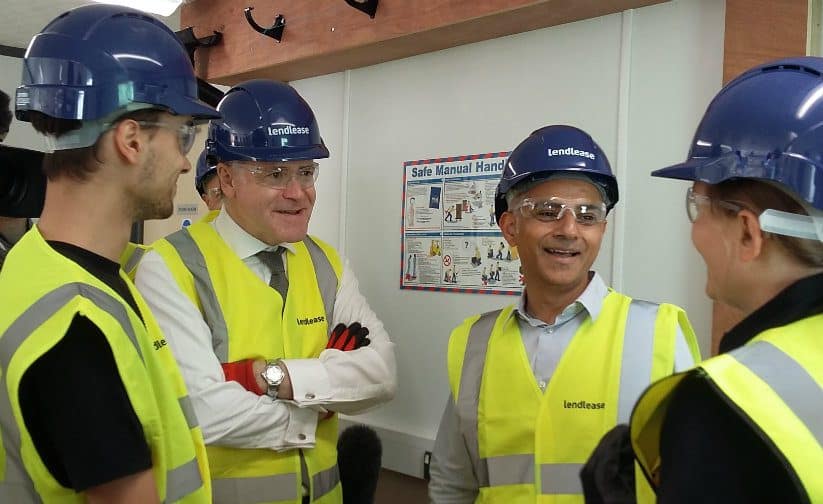 A new Construction & Skills Centre where hundreds will earn construction qualifications has been unveiled, as new employment figures show Southwark has its highest ever proportion of people in work.

The site was developed in partnership with Lend Lease, the multi-national developer tasked with building the estate near Elephant and Castle.

The council hopes 1,000 people each year will pass through its classrooms and workshops, which has already taken on a cohort of over 400 for the latter part of this year.

Mr Khan chatted to future house builders from the borough, who it is hoped will work on schemes in Canada Water and Blackfriars.

“We know that fixing the housing crisis won’t happen overnight and we know how important it is to tackle the skills shortage in the construction industry,” Mr Khan said

“It’s crucial we get better at responding to the needs of housing, whilst putting productivity front and centre.

“It was fantastic to meet London’s future home builders and I am now even more determined to push on with a pledge to lead a new skills agenda for London.”

Councillor John said: “Southwark Council is proud to be paving the way to create a borough of builders ready to work on a range of construction sites all over London, the country, and even the world.

“With our own commitment to building 11,000 new council homes we are seeing a significant level of construction work planned or being undertaken over the coming years.

“[It’s] why Southwark has created this innovative new centre that will train local people to take advantage of the jobs being created on their doorstep through these regeneration programmes.”

Meanwhile, the borough was also given reason for cheer, as new labour market data showed that 76.5 per cent of the 250,000 Southwark residents aged sixteen or over now have a job.

Councillor Johnson Situ, Southwark Council cabinet member for employment, business and culture, said: “We’ve worked hard to ensure that opportunities created by the regeneration of key areas in Southwark benefit our residents, and these statistics show our efforts are paying off.

“The council set itself an ambitious target to create 5,000 jobs over the next few years, and we are on target to achieve that. We know that 500 jobs have already been created at Elephant alone, and everywhere you look in Southwark, opportunities are being created to give local people sustainable and meaningful employment.

“A solid job brings many other benefits, including security and confidence, which is why we’ve put so much energy into creating these jobs. We also believe a fair day’s work deserves a fair day’s pay, which is why all our staff are paid the London Living Wage. We are now working with businesses to help roll this out further and to work towards making Southwark a full employment borough.”

The council also revealed it created 412 apprenticeships in in the financial year 2015-16: 60 through direct recruitment, 114 by contractors and 238 through other means.

Southwark NewsNewsThere’s more people in Southwark with jobs than ever before, as mayor visits new construction skills centre