He spent 52 days in hospital learning to walk, swallow and stand again 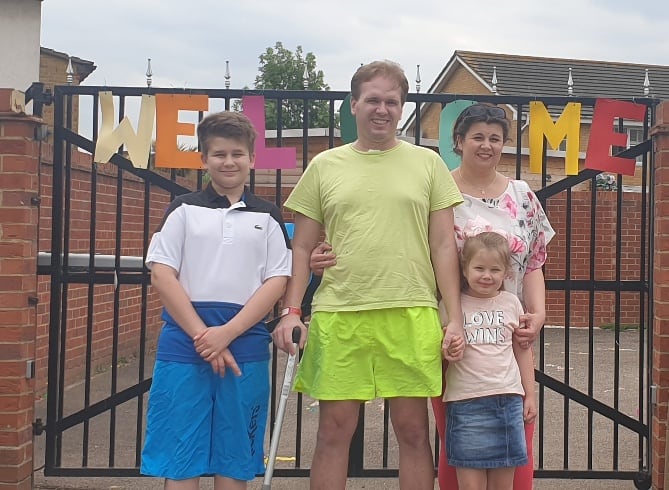 Chris Kuzelewski and his family

A dad-of-two who nearly died from coronavirus has thanked the doctors and nurses who looked after him as “national heroes.”

Chris Kuzelewski was first admitted to hospital in April, struggling to breathe, and then was transferred to St Thomas’ intensive care unit.

The 41-year-old spent four weeks in a coma, and needed to be hooked up to a special machine which oxygenates the blood in order to survive.

It replaces the work of lungs and hearts temporarily to allow the organs to heal.

“There are no words to describe what everyone did for me. They have saved my life and given me a second chance,” said Chris.

“They are national heroes and when my life was on the edge they were the angels who kept me alive – I cannot thank them enough.” It was the first time Chris had ever been admitted to hospital – and he was so sick he rang his family to say his goodbyes.

“When I woke up at St Thomas’ the doctors and nurses explained that my condition was really poor and unstable which is why I was put in a coma,” he said.

“The first thing that went through my head was how lucky I was to still be alive.

“The care I received was outstanding and I saw so much hard work and teamwork – it’s something I’ll never forget.”

After 52 days in hospital, learning to swallow, stand and walk again, Chris was able to go home on May 27 and is continuing to recover with his wife, Joanna, and children, David and Sophie, by his side.

At first, Chris’s kids didn’t even recognise their dad because he had lost so much weight during his illness.

“I think it’s been more traumatic for my family because they didn’t know if I’d survive, whereas I was in the coma so didn’t know what was going on,” said the project manager from Thamesmead.

“I hope that by sharing my story other people will understand the consequences of what it’s like to get coronavirus, and will take it seriously.”

Dr Nicholas Barrett, a consultant in critical care medicine at Guy’s and St Thomas’, said the hospital was one of only five in the country able to provide the specialist care Chris needed.

“We are delighted that Chris has survived and is now back home with his family,” she said.