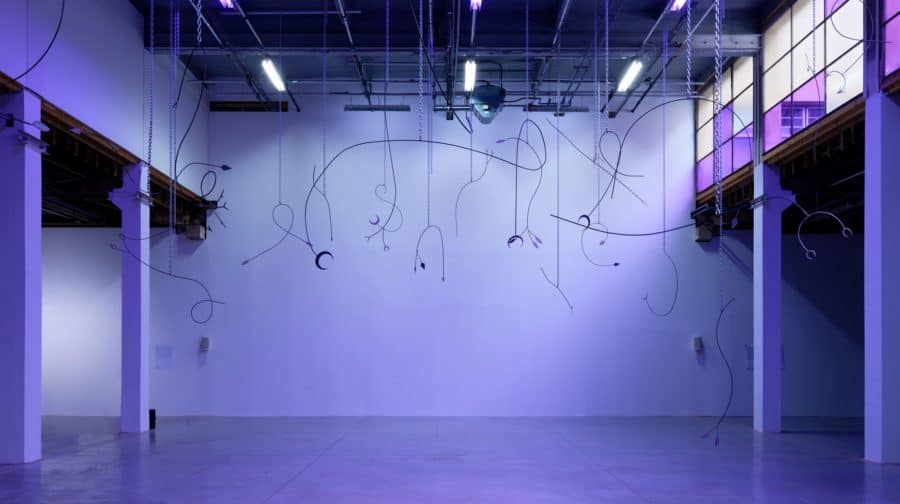 ‘Perfume of Traitors’ is French-Arabic artist, poet and writer Tarek Lakhrissi’s first solo show in the UK. The exhibition presents an installation by the artist comprising of a new series of metal sculptures which exist somewhere between swords and signs, continuing the artist’s research into the need to defend oneself as a political practice and building a new language through visual forms.

Lakhrissi works across installation, performance, film, text and sculpture, Lakhrissi engages political and social issues around transformative narratives within language, magic, weirdness, codes and love. Having studied literature, each project Lakhrissi initiates derives from text; Poetry and language being his primary obsession, before translating ideas from these mediums into the visual arts. 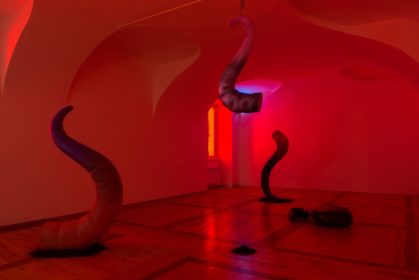 Similar to his installation produced for Crac Alsace (2019) and Palais de Tokyo (2020), the metal sculptures shown in ‘Perfume of Traitors’ are able to be wielded, but considered failed or useless because of their blunted manufacturing. The artist considers this romantic self-sabotage a rendering of empowering oneself in a non-threatening and non- violent way. The works then become a political threat, being wielded by those who are marginalised and affected by oppressive, racist & homophobic politics & societies.

Drawing on pop-culture heroines such as ‘Xena: Warrior Princess’ and ‘Buffy the Vampire Slayer’, the sculptures are styled on mythological weapons, that as well as having a mass sex appeal, signifies power and strength of the individual; throughout his work, Lakhrissi maintains his own identity by folding in signifiers such as this. The sculptures are inscribed with lines of text sourced from the artists own poetry and writing, and arranged across the gallery space to form a word or symbol. This hidden, secondary element remains shrouded as the language is unknown, fabricated by the artist to conceal its meaning from those who are not meant to read it.

The space is filled with a toxic green colour giving an ambiguous atmosphere; seen by the artist as a deterrent for some, but a sign of safety for others. The installation spans VITRINE’s 16 metre window space which is viewable 24 hours a day, 7 days a week from Bermondsey Square,