It promises boos, hisses, lots of ‘he’s behind yous’, a sing-a-long song and all the classic panto antics that we love. 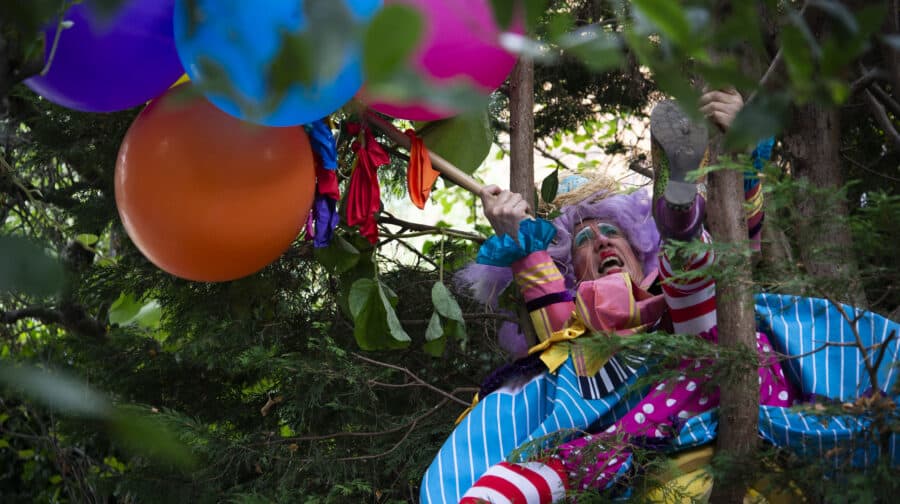 Blue Peter’s Peter Duncan launches Panto Online, the UK’s first pantomime filmed entirely on location to be watched online by families over Christmas. or at selected cinemas. Peter has signed deals with UK cinema chains Everyman and Showcase to give a cinema release to his socially distanced online pantomime, ‘Jack and the Beanstalk’.

When theatres across the UK closed and hundreds of pantomimes were cancelled due to the pandemic, Duncan conceived ‘Jack and the Beanstalk’ as an online alterative to be downloaded by families to watch together at home over Christmas. But the film has impressed UK cinema chains and it will now get a VIP red carpet premiere at the Everyman Cinema in Crystal Palace at the beginning of December, then roll out to all Everyman cinemas on December 4, followed by Showcase and Showcase Cinema De Luxe cinemas on December 11.

The TV legend says: ‘It is a national tragedy that pantomimes in theatres across the land have been cancelled this year. Panto is as much a part of Christmas as turkey and all the trimmings, Father Christmas and Carols. We sincerely hope our traditional production of ‘Jack and the Beanstalk’ will be a great Christmas event for all the family to look forward to watch together and at the same time raise money for five charities.’

Duncan – a critically acclaimed Panto Dame, Writer and Director – is planning his biggest and best ‘Here’s One I Made Earlier’ challenge with his self-penned ‘Jack and the Beanstalk’.

He has assembled a talented cast of actors and top creative team and is using his own massive back garden in South London to film ‘Jack and the Beanstalk’, a socially distanced pantomime complete with ingenious sets, fabulous costumes and even a real beanstalk! Giant Blunderbore is in a terrible rage. He shouts from above threatening to eat any villager who won’t pay their rent. Poor Dame Trott has to sell her precious cow ‘Buttercup’ and sends her son Jack to the cow market. All he comes back with is a worthless bag of beans. Jill, the grumpy Squire’s daughter is kidnapped by the Giant’s dogsbody Fleshcreepy and taken to the castle in the clouds. Will Jack be the hero, climb the beanstalk, rescue his girlfriend and save the world from the human chomping ogre? Only the magical Garden Fairy knows the answer to that…

This Christmas, from 4 December, Panto Online will stream ‘Jack and the Beanstalk’ directly into homes for the perfect family treat. It promises boos, hisses, lots of ‘he’s behind yous’, a sing-a-long song and all the classic panto antics that we love. Join in and enjoy this new online planet-saving pantomime packed with songs, laughter and great spectacle. Profits from Panto Online will be supporting six fantastic charities and youth projects:

Tickets are now on sale at www.pantoonline.co.uk for a special early bird price of £15; Early bird family ticket (including online activity pack): £25 – and the panto will be available for you to watch as many times as you want between December 4 and January 10.