TfL still have not published business case for Camberwell station 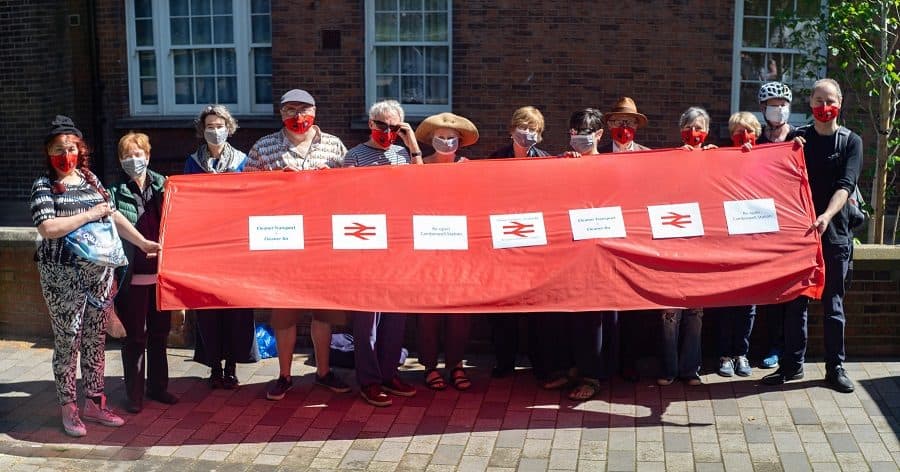 Harriet Harman and Helen Hayes handed a 2000-signature petition to re-open the defunct Camberwell station to transport minister Jo Johnson this week – but a year after it was meant to be made public, TfL still does not have a date for publishing its business case.

Harriet Harman told the News: “Helen Hayes MP and I met the Rail Minister, Jo Johnson MP, to press the case for re-opening Camberwell Station and deliver a petition of over 2000 local people’s support.

“The Minister told us that Transport for London is moving into the final stages of evaluating the case for re-opening the station, so I along with Helen, South London and Maudsley Hospital, Kings College Hospital, SE5 Forum, Camberwell College of Arts, and Cllr Peter John, Leader of Southwark Council have written urgently to TfL Commissioner Mike Brown to reiterate and emphasise with absolute clarity the level of local support from businesses, organisations and residents for re-opening the station.

“We want to ensure TfL are left in no doubt that the calls made over many years for the station to re-open are more intensely felt than ever as the local population grows, the hospitals grow and Camberwell College of Arts expands, and we keenly await the publication of TfL’s report.”

Last month, as the News reported, members of the SE5 forum staged a demonstration on Camberwell Green,  arguing that bringing the derelict station back into use will help tackle the growing problem of air pollution in the capital.

According to the group, recorded levels of pollutant nitrogen dioxide per cubic metre outside Camberwell’s McDonald’s in May 2018 were more than double legal limits set by the EU.

Air pollution is known to be a factor in health problems such as asthma and other lung diseases.

Residents also believe the station could help reduce traffic congestion and give a boost to Camberwell’s businesses and traders.

Today @HarrietHarman & I met the Rail Minister @JoJohnsonUK to present a petition in support of reopening Camberwell station and to ask for his support – urgently needed to improve transport services for local residents, businesses & hospital #CamberwellStation pic.twitter.com/ZnZpfGAlRB

Sophy Taylor, on behalf of the SE5 Forum, said: “We’re delighted that Harriet Harman and Helen Hayes have been able to put the case for reopening Camberwell railway station to Jo Johnson in person.

“Community support is such a vital factor to consider when prioritising which transport projects move forward. This message needs to be heard loud and clear at the department of transport, and at TfL.

“This visit today demonstrated just how much residents and businesses in SE5 want the station to be reopened.”

The campaign has grown since 2014, when re-opening the station was first mooted as part of the proposed Bakerloo line extension, with two potential routes via Old Kent Road or Camberwell.

However, TfL  had committed to publishing a business case for re-opening Camberwell station in May 2017 – but are still yet to be published.

Last month,  Matthew Yates, TfL’s Head of Transport Planning and Projects, said: “We are working with Southwark Council and Network Rail to produce a business case looking at reopening the Camberwell Thameslink station.

“One of the key things we need to assess is future public transport needs and demand to determine if the project should be taken forward. We anticipate the business case will be released shortly.”

Last month, a spokesperson for TfL also disputed the SE5 Forum’s claims that the station’s platforms still existed, staying although some old infrastructure exists, it is in poor repair and has not been used for decades, and there is no indication it would be safe to use.

On Friday June 22, TfL said a date for publishing the plan was not yet confirmed.