Pheasant causes a flutter after taking up residence in Peckham

The fully-grown male pheasant was first spotted six months ago 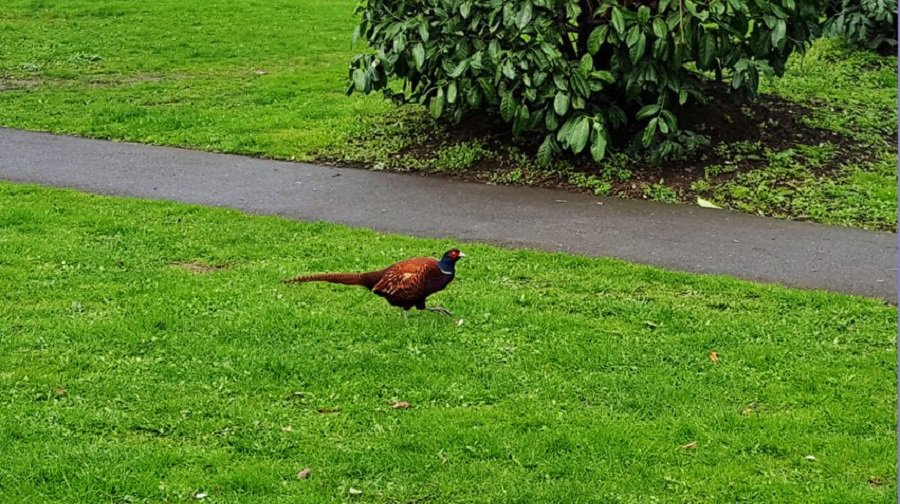 Residents have gone all of a flutter over a pheasant that appears to have taken up residence – in Peckham.

The fully-grown, male pheasant – who has been missing after first being spotted around six months ago – was back on Peckham Rye last week – with many people taking to Twitter to show off their sightings of him.

Peckham woman Rebecca Williams was walking to East Dulwich via the north of Peckham Rye when she spotted the pheasant “hanging out” across the road.

“I wondered if it was sleep deprivation at first because everyone else was just carrying on as normal,” said Rebecca. “It was surreal. I had no idea there were those kinds of birds in London.”

“He was just walking around having a peck. He looked a bit lost obviously because he was in the middle of London but he didn’t seem hurt or distressed.”

“It made me laugh because there’s lots of stuff about Peckham being gentrified and there’s nothing more symbolic of that than a pheasant,” she said.

Lewisham man Darren Palmer was on his bike at the junction of East Dulwich Road and Peckham Rye when the pheasant crossed the road in front of him.

“He went over flapping like a chicken, going in between the cars,” said Darren. “The direction he was going in, I’m guessing he probably came out of Nunhead Crescent. Maybe he was on his way back from dropping his kids off at the primary.”

“He didn’t get run over so he obviously has some road sense.”

“Seeing him brightened my day! You don’t see wildlife in the city often. It heartened me!”

David Champion reports that he, friends and neighbours have seen the brightly-coloured pheasant around Rye Hill Park on numerous occasions.

“Goodness knows how he got there. They’re not great fliers,” said David.

While locals are wondering how a game bird has ended up shacking up in the middle of Peckham, the RSPB told the News that it was really not so strange.

“It happens on quite a regular basis. A large number of birds are released into the wild during the shooting season and some find their way into urban areas. They usually end up there looking for food,” a spokesperson said.

“They rarely take up residence. There’ve been cases of pheasants nesting but the vast majority would just be passing through.”

Southwark NewsNewsPheasant causes a flutter after taking up residence in Peckham