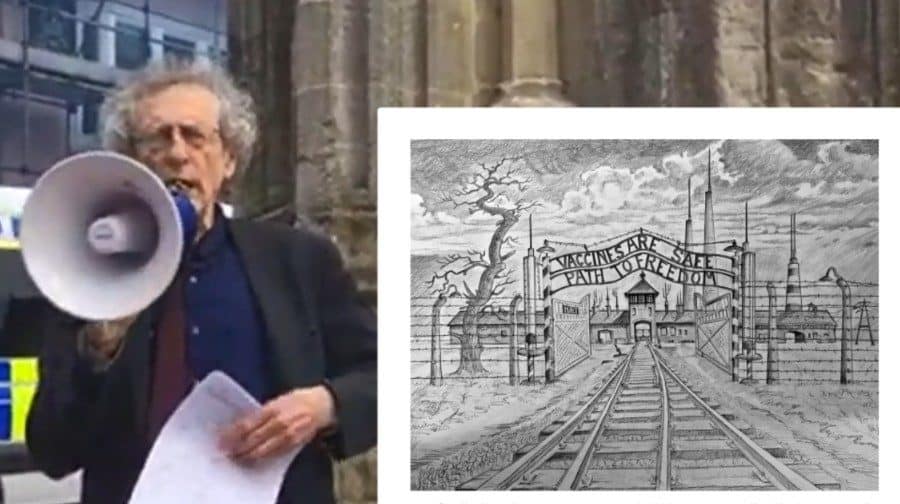 Walworth’s Piers Corbyn, a prominent anti-lockdown activist, has been slammed for an ‘utterly sick’ leaflet which compares the coronavirus vaccine to Auschwitz.

Groups affiliated to Mr Corbyn, who now intends to run for the London mayoralty, handed out the leaflet at a demonstration in central London before lockdown.

The flyer compares vaccines to the infamous concentration camp, Auschwitz, alongside misleading claims about Covid vaccines.

A graphic, which the leaflet claims was thought of by Mr Corbyn, shows the gates to Auschwitz alongside the words ‘Vaccines are safe path to freedom.’

The leaflet then signposts readers to a website with interviews of the conspiracy theorist and a raft of disputed or untrue claims about the safety of vaccines.

The leaflet has also been shared by Mr Corbyn on his social media.

“And his abuse of the Holocaust to promote his dangerous views about vaccines is utterly sick,” he said.

The Auschwitz Memorial has also blasted the image, saying: “Instrumentalization of the tragedy of people who suffered and were murdered in concentration and extermination camps as a result of ideology of hatred in order to argue against vaccination that saves human lives is an appalling symptom of moral and intellectual decline.”

Mr. Corbyn commented: “The leaflet exposes the fascistic nature of the NewNormal and NewWorldOrder. People who appear to be saying it is somehow anti-Semitic are deranged.”