The powerful dog attacked a Jack Russell Terrier and a dogwalker in Brimmington Park last Friday. 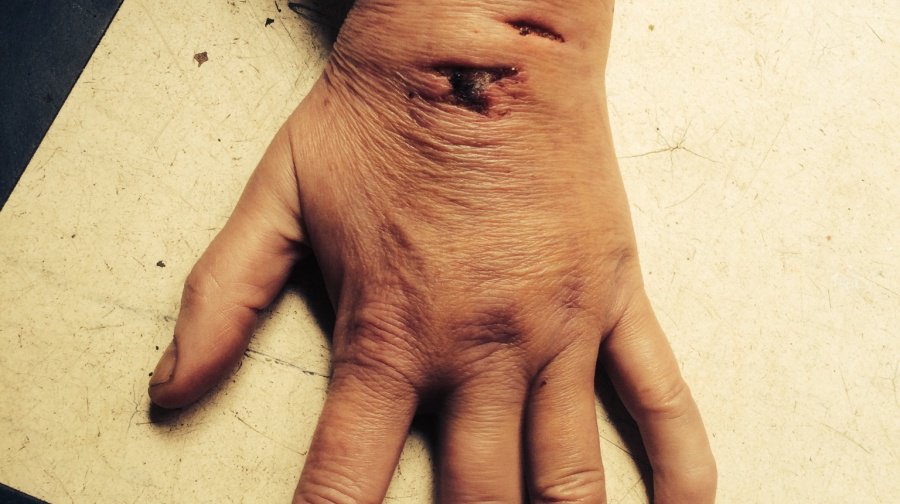 Dee Evans needed stitches after she was injured by the aggressive dog.

A dog walker was left needing stitches after she and the pet she was with were savaged by what was thought to be a pitbull in Peckham last week.

Tiberius, a playful two-year-old Jack Russell Terrier, was set upon by the violent mutt while being walked by his owner’s neighbour Dee Evans, in Brimmington Park on Friday afternoon.

Dee said: “It came out of nowhere – the dog was just going for him! I dived between the two and tried to separate them. The dog bit Tiberius and got me by the hand.

“I was rolling about with one hand in the dog’s mouth and the other up its bum, which I’d heard makes dogs release their grip. A man came to help and eventually it gave up. I dived on Tiberius to protect him and then picked him up and ran away. It was horrific, and I’m just glad he’s alive.”

Tiberius recovering at home after the attack.

Dee’s hand was cut and she needed stitches after the attack. The dog was taken to a vet and the police were called. Luckily the injuries suffered by the poor pooch were not serious, and he is now recovering at home.

His owner Christobelle Batchelor said that even days later he was still “shaken up and nervous.”

The fashion stylist said: “It’s just irresponsible to have such a violent dog and not be able to control it. The owner was nowhere to be seen. It’s ridiculous. The dog could’ve killed Tiberius, or even worse could have attacked a child.”

The number of offences involving dangerous dogs rose by 50 per cent last year, with a total of 1,400 incidents in the capital last year.

Police have advised anyone with information about the incident to call the non-emergency number 101.

Tiberius with his owner Christobelle.