Dickens Estate residents have complained about a spate of dog attacks this summer. 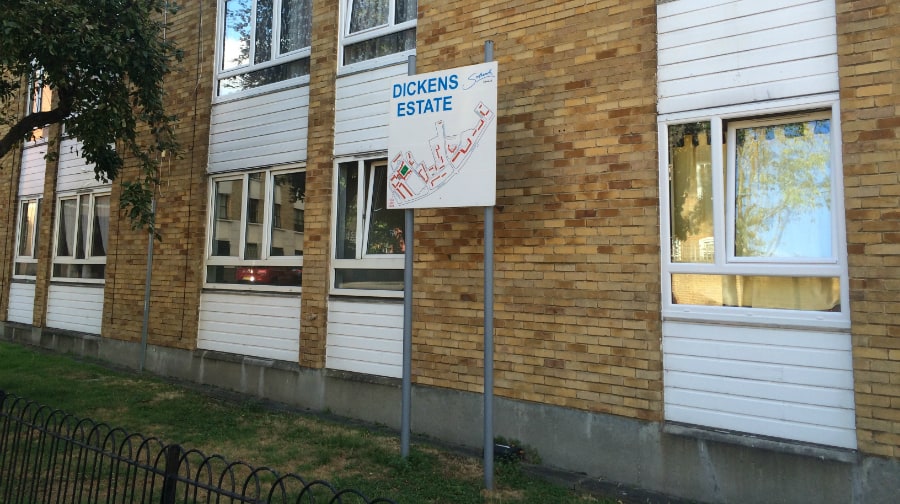 A “suspected pitbull” was seized by police from a Bermondsey estate last week after a vicious attack on another dog.

Police confiscated the dog at 6.45am last Friday, executing a search warrant under the Dangerous Dogs Act at a property on the Dickens Estate.

A police spokesperson said that it had been involved in an alleged attack on another dog on June 29 by Copperfield House.

They said: “It was reported that a male was out walking his dog when a pitbull like dog attacked his dog and bit it six times which resulted in her needing treatment from vet.

“The offending dog, described as a pit bull held on to the dog and the owners, two males, had to use force against the dog for it to release its bite. Once the dogs were separated the owners of the pitbull left the scene.” There have been a spate of pitbull attacks in the SE1 estate this summer, with one resident, who wished to remain anonymous, telling the News that up to five other dogs had been attacked.

She said: “In three months there have now been six attacks. I saw it [a dog] attack one dog, it just came out of nowhere. Pitbulls are so dangerous, it makes you worried when you see young children about.”

Another dog, a King Charles, was badly injured after being attacked by a suspected pitbull in the estate. The seized dog is now in a secure kennels while police try to determine whether it is a dangerous breed, such as a pitbull terrier of dogo argentine, both of which are illegal in the United Kingdom.  A police spokesperson said that if the dog is found to be of an illegal type, it is likely that it will be destroyed. It may still be destroyed even if it is not an illegal type but still deemed dangerously out of control. The dog may also be rehomed or returned to the owners, depending on the results of the investigation. No arrests have been made.