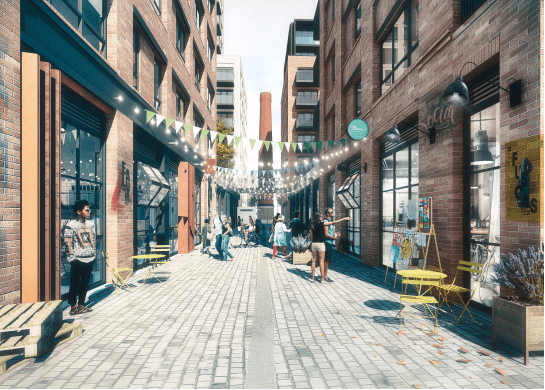 Illustration of the proposed "Camberwell Union"

Burgess Park business park could soon become the ‘Camberwell Union’ creative centre, if plans to build 500 homes and commercial space on the industrial site are approved.

The developer, which has owned the land for 20 years, is looking to demolish the units and build 505 new homes, with 35% classed as ‘affordable’, along with retail units and work spaces. A historic chimney will be kept and used as a set-piece for the new destination.

Out of 160 affordable homes, 70 per cent will be socially rented and 30 per cent ‘intermediate housing’, built to the same standard as elsewhere in the block.

After feedback from an initial round of public consultation, Camberwell Union designs were altered to lower the tallest building’s height from eighteen to fourteen storeys, and include more art and gallery space, in the form of public ‘yards’.

A spokesperson for Peachtree said: “Our ambition is for the ‘Camberwell Union’ project to become a new creative centre in Camberwell, bringing over 200 new jobs and 500 homes to the area – with 35% affordable housing.

“We have worked for over a year on plans for the site and submitted a planning application at the start of 2018.

“We are now considering the feedback it has received and continue to talk to Southwark Council about refining the designs. We want to ensure that it fits in well with the local area and what it needs.”

The Friends of Burgess Park group say its members are worried the park’s green space and woodland will be overshadowed, and the Wells Way Triangle Residents’ Association is concerned the development does not include a much-needed new pharmacy or GP surgery.

The planned development will also obscure views of a grade-listed historic church spire on the park’s skyline.

Susan Crisp, from Friends of Burgess Park, said: “The group is not opposed to development but we are concerned about over shadowing, loss of sunlight and the impact of tall buildings all around this narrow park.  We do not want the park surrounded by tall buildings.

“Many more towers are being planned for the Old Kent Road and taller blocks are already approved along the Albany Road replacing the Aylesbury Estate.”

Southwark Council is considering Peachtree’s planning application, submitted on December 22, last year, and is due to make a decision in the coming weeks, with construction potentially starting as early as the autumn.