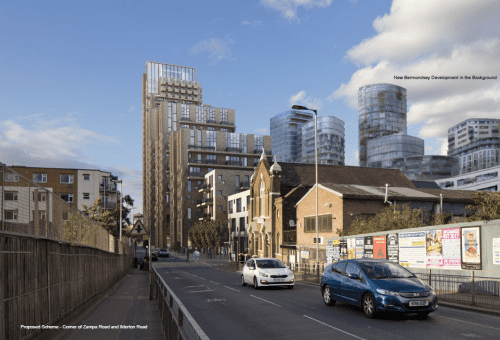 How proposed development would look

Plans for more than three hundred homes near The Den are set to be approved next week.

The proposed development on the corner of Ilderton Road and Zampa Road in South Bermondsey would see two towers created, separated by a children’s play area.

The first of the buildings would rise up to 28 storeys in parts, while the latter would have a height of up to 13 storeys.

312 homes would be created, 35 per cent of which are designated ‘affordable’ as well as commercial and retail space.

The bulk of those affordable homes, 25 per cent, are designated as social rent homes, with the remaining being shared ownership.

A report due to be heard by the town hall’s planning committee next week states: “In conclusion, the level of affordable housing proposed is a very positive aspect of the proposals.

“The proposed development would make a very positive contribution to the landscape through the creation of a new public children’s open space and high quality landscaping.

“Improvements would also be provided to the local Ilderton Primary School where the developer has agreed to fund the provision of a green living wall to the Ilderton Road boundary of the school.”

It states that if approved the pavements surrounding the development would be widened, because of crowds flocking to The Den – noting the “challenging crowd management” sometimes faced by police in dealing with away fans at the ground.

It adds additional security would be provided on match days.

The Club has voiced its support for the scheme in principle.

“Whilst the Club is generally in support of the principle of this application and the wider regeneration of the surrounding area, it is critical to ensure that the Club can continue to thrive in this location,” states the report.

The area immediately surrounding The Den – including the stadium itself – is due to be redeveloped in a scheme promoted by Lewisham Council.

Affordable 🙂 The average ‘affordable’ rent in Bermondsey is about £1400 a month. More cleansing of the working class by Southwark council