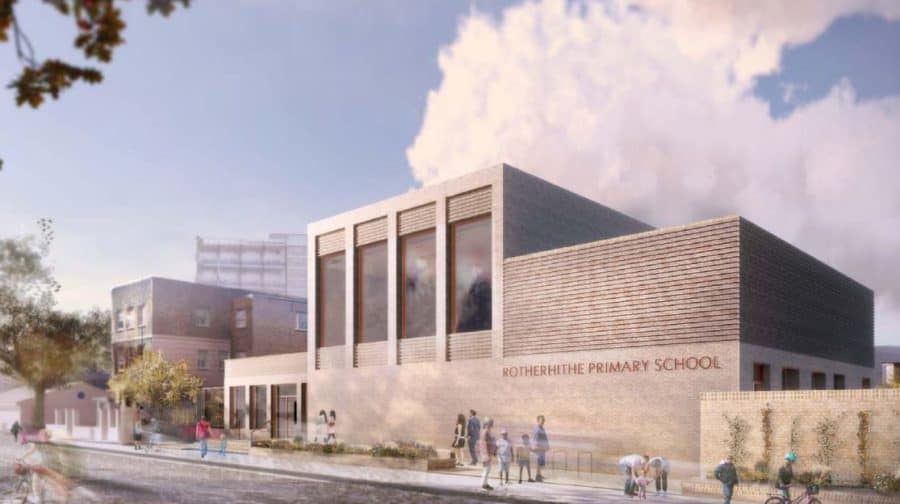 An artist's impression of how the new school site would look if the proposal is approved (Image: Feilden Clegg Bradley Studios)

Detailed plans have been submitted for the demolition and rebuilding of a Rotherhithe school.

The proposal would see the existing buildings of Rotherhithe Primary, on Rotherhithe New Road, demolished and a new two-story primary school built in its place.

The new expanded site would accommodate 630 school pupils as well as a 60-place integrated nursery.

The current single-story buildings were built in 1971 and are thought to have outlived their shelf-life. Refurbishment is not thought viable.

According to the architects, Feilden Clegg Bradley Studios, the area’s dockyard and engineering past has inspired the new building design.

“The conceptual idea for the building seeks to evoke the memory of past. The ribbon of the garden wall wraps around the site creating a protected central courtyard evocative of the historic basins and dry docks which were once carved out of the Rotherhithe peninsular,” the application states.

“The organic shapes and materials of the landscape flow into the ‘basin’ of the courtyard which is framed by the more rectilinear walls of the building, inspired by the retaining walls of the dry docks and Brunel’s engineering legacy.”

The plans also include landscaping of the school grounds and the construction of a “multi-use games area.”

An existing day care centre on the school grounds, accessed from Rotherhithe New Road, will remain operational during the work, but may get new premises in the future as part of council plans for the remaining land.

A date to consider the application has not yet been announced.