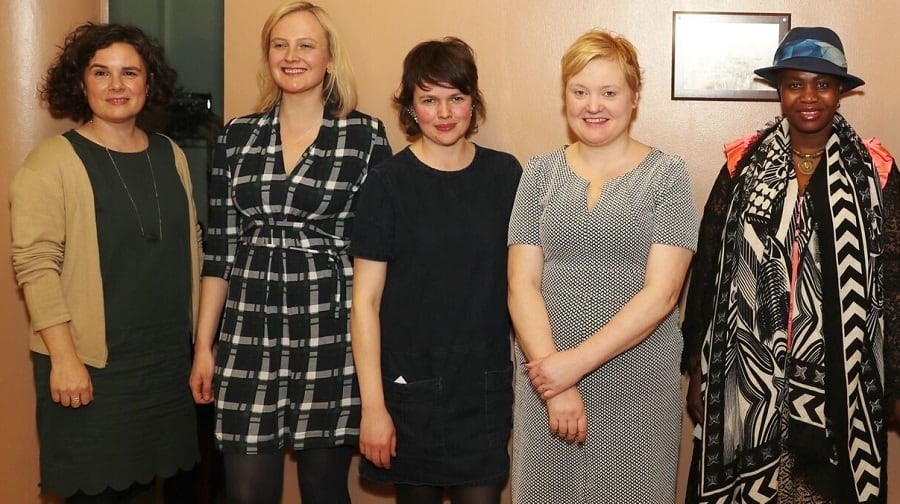 A panel discussed tackling and preventing violence against women and girls during an event at the Beormund Centre. (L-R) Katie Kelly, Leanne Werner, Radha Burgess, Fiona Twycross and Sarian Kamara

The manager of a Peckham-based charity project hopes to set up a ‘one-stop shop’ offering support and advice to vulnerable women.

Katie Kelly, manager of the Moving On programme at charity Pecan, plans to launch a female-only hub where women and girls with complex needs, including issues of domestic abuse and involvement with the criminal justice system, can go for help.

Moving On helps women who are either in or coming out of prison to settle back into the community – but Katie wants to do something to prevent them from getting caught up in the criminal justice system in the first instance.

“There’s a massive connection between women and girls who experience violence and go on to commit crimes,” said Katie. “We are keen to do something at the preventative end of that.

“We are trying to set up a bit of a one-stop shop for vulnerable women with complex needs, but with a longer term vision of it being a place where women in the community can meet.

“It would be a place where women can come and get all of their needs addressed in one place; maybe the need for housing advocacy or support with parenting or substance abuse or mental health.

“At the moment there’s nowhere in Southwark where women can go and all of those things are in one place.”

Katie said her real vision was to create a resourcing centre for all women in Southwark and to become good at knowing what support was available in the borough and to help co-ordinate it.

“We wouldn’t take the place of any of the agencies that already exist in Southwark such as Solace, Bede House, Victim Support, and Rape Crisis, but if someone reported to Solace and they were working with them around their domestic violence they could refer them to the hub afterwards,” she said.

The team would need about £65,000 to get off the ground and open for two days a week – but Katie would like the hub to be open every day.

So far, Pecan has £20,000 worth of funding for the hub committed and has bids in to the MoJ and the Tampon Tax which would cover the rest of the money if secured.

“If we get that funding, we could start very quickly,” said Katie.

Katie was recently a panellist at a Violence Against Women and Girls event held at the Beormund Centre, in Bermondsey, on March 9.

The event, organised by Leanne Werner, women’s officer for Bermondsey and Old Southwark Labour, aimed to increase awareness of violence against women and girls.

Other panellists to appear alongside Katie and Leanne were Councillor Radha Burgess, who launched the country’s first Women’s Safety Charter; activist Sarian Kamara, founder of Keep the Drums Lose the Knife, who gave a first-hand account of her experience of female genital mutilation (FGM); and Fiona Twycross of London Assembly.