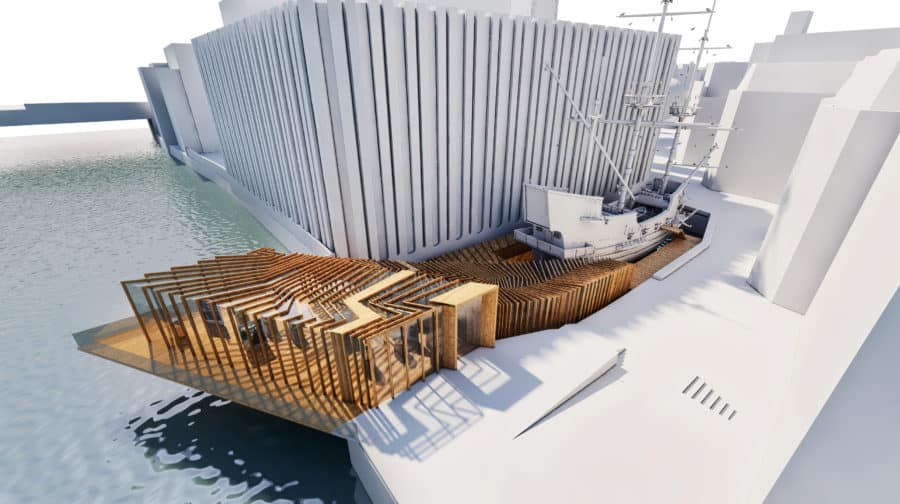 Plans for a new museum and visitor centre for the Golden Hinde – a replica of Sir Frances Drake’s famous ship – have been unveiled.

The proposals, which are due to be submitted for planning permission later this year, would see the ship refurbished and new ticket halls and education spaces for the tourist attraction.

The scheme will be split over two levels, with the lower ground level featuring a visitor centre with a covered walkway to viewing galleries and office space. Trevor Morriss, Principal at SPPARC, said: “The brief for the new Golden Hinde visitor centre called for a unique design which learnt from the skilled craftsmanship and innovative nautical engineering of this iconic ship.

“The concept was derived through the desire to reflect this history of The Golden Hinde and Sir Frances Drake in a contemporary visitor centre.”

Refurbishment is currently being carried out on the Bankside attraction, with 56 tonnes of sustainably sourced oak from the New Forest and Sussex to return the galleon to its former glory.

Angus Francis Coleman, Director of Golden Hinde Ltd, said she was “most impressed by the way the building both complements the ship and ties in with the modern surrounding architecture.

“This visitor centre will allow us to deliver on a much grander scale and will turn The Golden Hinde into a major cultural destination.”