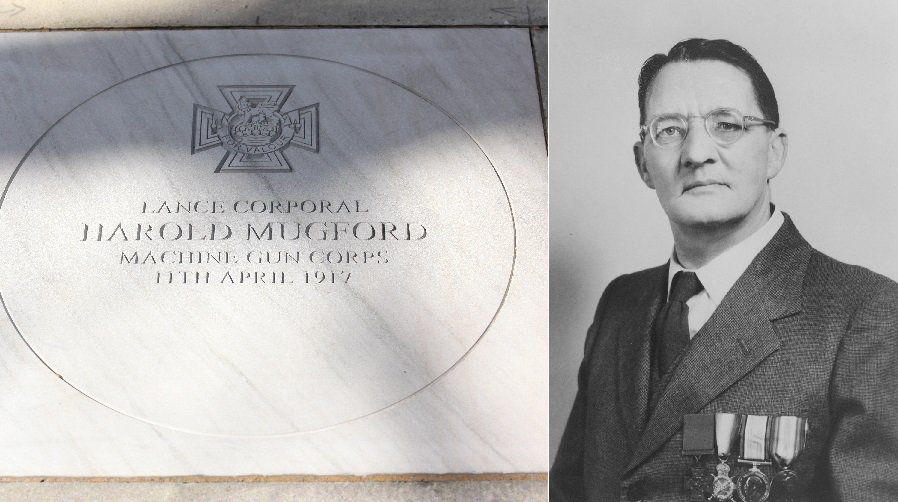 A Bermondsey WWI hero whose bravery as a machine gunner earned him the Victoria Cross has been honoured with a commemorative plaque.

The plaque was laid in honour of Lance Corporal Harold Mugford  from Keetons Road on April 11 at the Bermondsey and Rotherhithe War Memorial in West Lane.

Mr Mugford, born in 1894, became one of the Essex Yeomanry regiment when he joined in 1914, along with his two brothers.

His older brother Richard returned after service, but his younger brother Percy died in battle.

Before the war he was a clerk with a shipping company, Furness Withy, and a keen cricketer. He saw action in the Ypres Salient in the early part of 1915 and again in May, where the Yeomanry distinguished themselves at the Battle of Frezenberg Ridge.  He was with the regiment’s machine gun detachment at the Battle of Loos on September 27-28, 1915, and fought there again in the early part of 1916.

Mr Mugford was awarded a Victoria Cross for his act of bravery at Monchy-le-Preux, Battle of Arras on April 11, 1917. He and his fellow Yeomen were part of the 8th Cavalry Brigade tasked with recapturing high ground on the east and north east of Monchy-le-Preux.

Heavy enemy fire from the village of Roeux in the north forced a change in the direction of the Yeomanry’s advance into Monchy itself.

Although the recapture of Monchy was a success, they quickly came under a fierce counter attack.

It was reported that the 8th Machine Gun Squadron did great work in helping to keep the attackers at bay, and it was Mr Mugford’s extraordinary bravery that earned him the Victoria Cross.

His machine gun partner was killed within minutes of the counter attack, and Mr Mugford was severely injured.

He was ordered to a new position and told to seek medical help, but continued on with his machine gun, inflicting severe loss on the enemy.

Soon after he was again wounded when a shell explosion broke both his legs.  He still remained with his gun, begging his comrades to leave him and take cover. Shortly afterwards this non-commissioned officer was removed to a dressing-station, where he was again wounded in the arm.

The valour and initiative displayed by Mr Mugford was instrumental in breaking up the enemy’s counter-attack. For his “conspicuous bravery and devotion to duty”, he was awarded the Victoria Cross.

He was not expected to survive his wounds, and was in a critical condition when brought back to England, and underwent six operations.

Both his legs were amputated above the knee and, in addition to the wound to his arm, shrapnel was removed from his hip, tongue and jaw.

He died on June 16, 1958, at the age of 63. He was afforded the honour of a military funeral in Chelmsford Cathedral, prior to cremation at the Southend Crematorium.  His wife Amy died in 1978.  They had no children.

The ceremony to unveil the plaque was attended by Mayor of Southwark Kath Whittam and Bermondsey and Old Southwark MP Neil Coyle.

The Victoria Cross commemoration was part of the centenary programme to remember the First World War. The Victoria Cross plaques are placed near the birth place of each VC holder, and this was the third to be unveiled in Southwark since 2014.