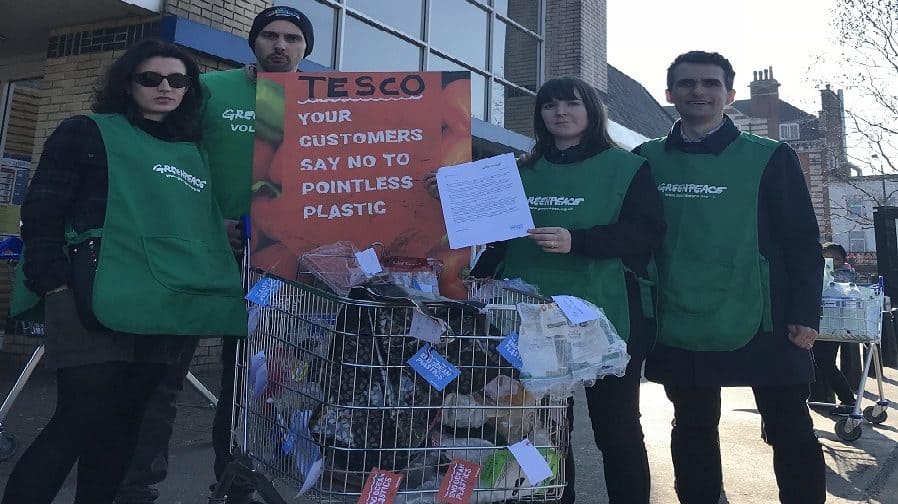 Greenpeace volunteers handed back ‘armfuls’ of unwanted plastic packaging to Tesco in Old Kent Road last Saturday in protest at the amount of single-use packaging used by the supermarket.

Volunteers from Southwark returned 80 pieces of single-use plastic packaging to the store that had been collected by customers, formed of 20 plastic trays from vegetables, 20 pieces of shrink-wrap, and 40 wrappings from fruit.

One volunteer, JC, said: “Over the last month, we spoke to hundreds of Tesco customers outside the superstore on the Old Kent Road.

“We found that many customers were avoiding fruits and vegetables wrapped in plastic.

“However, many others couldn’t avoid it and were very upset about the amount of pointless plastic Tesco forces them to buy.

“Today we returned a trolley full of plastic as a symbol of how much pointless plastic is generated in a few hours by Tesco and other supermarkets.

“Whilst there are a lot of products that are wrapped in unnecessary plastic we found that many customers were getting really annoyed by the wrapping around bananas and avocados.”

The environmental charity is lobbying supermarkets and food shops across the UK to ditch single use plastics.

Tesco says 83 per cent of its own-brand packaging now meets the ‘widely recycled’ criteria in its stores, and as part of the industry coalition ‘Plastics Pact’ it has committed to eliminate single-use packaging – but not until 2025.

Increasingly, campaigners are urging retailers to cut down on plastic full stop, even if it can be recycled, as scientists warn we are facing an environmental crisis.

The United Nations has warned that only nine per cent of plastic waste produced has ever been recycled, with the rest incinerated or accumulating in landfills, dumps, or the natural environment.

If our current rate of plastic consumption continues, by 2050 our oceans could contain more plastic than fish.