Feyi Coker, 23, took it upon himself to get a new playground for the estate after seeing children play in unsafe conditions 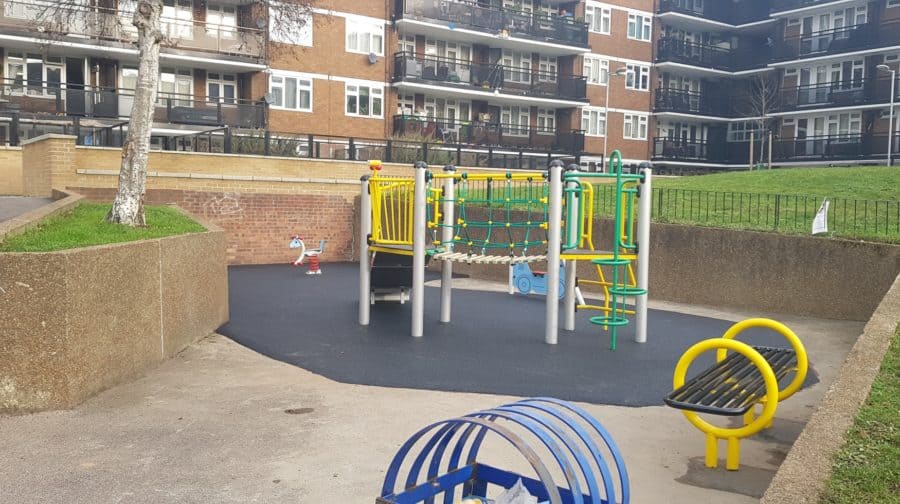 The new playground was the result of a resident's bid to the Cleaner, Greener Safer fund

A new £17,500 playground has been unveiled on a Bermondsey estate following a campaign by a resident.

Feyi Coker, a 23-year-old resident of Lockwood Square, began the campaign to improve the play area after noticed children on the estate were playing in unpleasant conditions.

He secured the money for the play area from the council’s Greener, Greener, Safer fund.

The project manager said: “Originally I wanted to change the playground, probably around nine years ago.

“I started thinking about it again on the spur of the moment, because the kids were playing on the landing.

“I wanted them to have a space for them to play that was pleasant and safe.” Feyi Coker, a resident on the estate, decided to try and get a new playground after seeing kids play in unsafe conditions

He was helped in his bid by ward councillor Anood Al-Samerai, who said she was “delighted” to support the project.

“Good play areas are essential for local communities and I have been delighted to support this project, led by a young person on the estate, and it is wonderful to see what a difference it has made,” she said.

Feyi credits his winning bid with getting the meeting to close their eyes and imagine the play area in front of them.

“I got them to close their eyes and imagine a place where kids could play without parents having to worry,” he said.

The project was part of wider cohort of schemes introduced as part of the 2017/18 programme.

Cllr Richard Livingstone, Cabinet Member for environment, transport management and air quality, said: “This is a lovely example of the council’s Cleaner Greener Safer fund bringing local people together and helping them to make their neighbourhoods better. I look forward to learning which projects our Community Councils will choose buy premarin online at their meetings very soon.”

The playground was unveiled on January 21.

Good for them and yet Kirby Estate remains run down even after the council said it would be refurbished after all the publicity of the world cup.