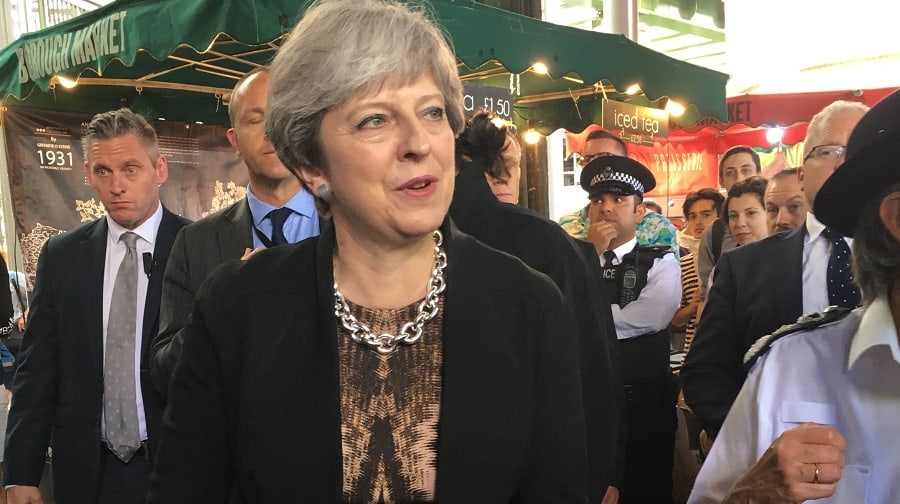 Theresa May joined Australia’s Prime Minister during a visit to Borough Market where eight people were killed in a terror attack last month.

The pair met with first responders and traders during the visit this morning, accompanied by Bermondsey and Old Southwark MP Neil Coyle and Met Police Commissioner Cressida Dick.

Prime Minister Malcolm Turnbull was visibly moved after speaking to the two police officers who gave CPR to Sara Zelenak – an Australian nanny killed in the attack, who had been working in Herne Hill.

Australian Kirsty Boden, a nurse at Guy’s Hospital, was also killed in the attack after rushing to help other victims.

The two Prime Ministers met with chair of Borough Market trustees, Donald Hyslop, as well as traders at the market – including Matthew Jones of Bread Ahead, Jack Applebee of Applebee’s Fish, and greengrocer Paul Wheeler of Paul Wheeler Fresh Supplies.

Jack Applebee – who was working on the night of the attack and stood just metres from the terrorists – said he talked to the Prime Ministers in detail about the events of that night.

“Everyone’s come together and that’s been the main focus point of it all really because the community spirit amongst everyone has been phenomenal so we were just talking to her [Theresa May] about that,” he told the News.

“I introduced a couple of policemen who tried to give CPR to two Aussies on the night as well so they were talking about them and everyone was just going over detailed events for both Prime Ministers to get an idea of exactly what happened and how everyone was affected.

“We had 40 customers in there [on the night of the attack]. We saw the terrorists and we got the shutter down and we got the customers all upstairs in the staff room and we all took cover for two hours until we got evacuated.”

Mr Applebee said he was trying to “keep quite strong” but that the tragic events had affected him.

“Obviously it does affect you and I’m a bit jumpy and still have a few nightmares but I’m just trying to get on with it,” he said.

Matthew Jones, a baker and owner at Bread Ahead, said eight members of his staff were working in the bakery on the night of the attack.

“I got phone calls – lots of them,” he told the News. “As you can imagine, the phone just went mental and then the next thing you read it on the news.

“We were talking [to the Prime Ministers] about the incidents of June 3 and how our lives were turned upside down on that night – very quickly the whole world went mad – and how we picked ourselves back up again.”

Neil Coyle MP said he hoped Theresa May had listened to the concerns of traders, some of whom faced significant losses after the market was closed for eleven days in the aftermath of the attack.

“It’s about jobs,” he said. “We can’t let anyone lose their job on the back of this – so hopefully she’s heard that message as well.

“As we were walking around – because the Business Minister Margot James is coming [to the market] on Thursday – that was the focus of the discussion.

“Generally it was a very positive reception; some of the individual thanks to the Commissioner [Cressida Dick] to pass on to the officers involved was really good to hear because they are still very grateful for how quickly officers responded and resolved and prevented any further attacks.

The market was closed for eleven days after terrorists wearing fake suicide vests rammed into pedestrians on London Bridge shortly before 10pm on June 3, before going on a stabbing rampage which left eight people dead and 48 injured.