Police have claimed that 250 people "rushed the front door" 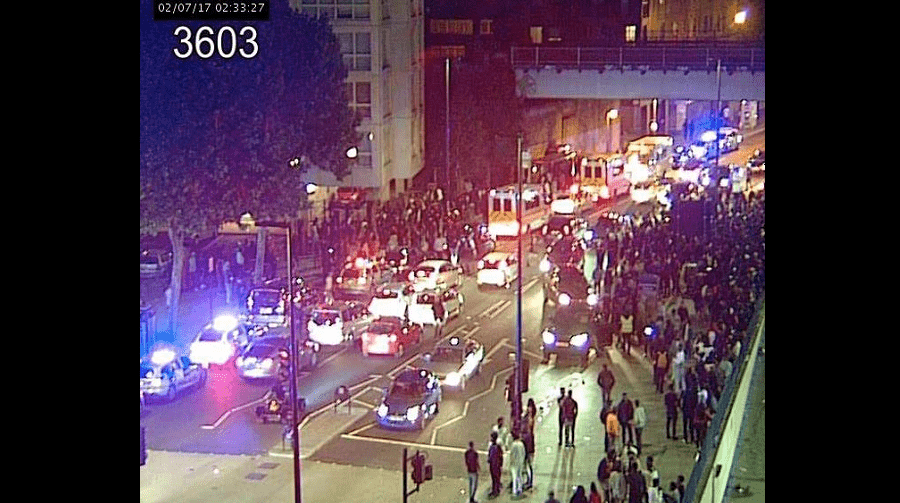 TfL photo of violence outside Coronet Theatre on July 2, 2017

The Coronet Theatre in Elephant and Castle will have its licence reviewed by Southwark Council, at the request of the police, following a violent disturbance outside the venue on Sunday.

The venue was forced to close early after a sold-out club night turned nasty, as a group of people without tickets tried to force their way into the 2,600-capacity venue.

CCTV images posted on social media by Transport for London Twitter accounts shows large crowds gathered outside the venue in the early hours of Sunday morning, and a wall of police protecting it.

A public notice on Southwark Council’s website, submitted by the police, says: “On the basis that the premises is associated with serious disorder in that on 02/07/2017 it is alleged that a fight broke out, missiles were thrown as 250 rushed the front door”.

The Met Police have released their own statement saying their Territorial Support – who usually police events such as football matches – attended and “discovered a large fight”. “A 25-year-old man was treated at the scene by the London Ambulance Service. Officers remained in the area until the crowd dispersed. There have been no arrests and enquiries continue.”

A Twitter user who witnessed the disorder posted this video online:

A review of the Coronet’s licence will be held later this month, by councillors who sit on Southwark Council’s Licencing Sub-Committee.

The Met has yet to publish details of any alleged breaches of the venue’s licencing terms.

Southwark Council has confirmed that an initial meeting between the venue’s management, police and council officers took place this morning, to discuss how the venue will operate in the interim period.

The News has contacted the Coronet’s owners, Elephant Music Limited, for a comment.

The historic music venue is already due to close in January, when its one-year lease extension with developer Delancey will expire, and it has events listed throughout the rest of the year.

Lit London, the company which promoted the grime, bashment and house music-themed event, published a statement on Twitter, which blamed the incident on “a small group of frustrated people who did not have pre-sale tickets”.

The statement said: “We sincerely apologise to the attendees who were unfortunately unable to gain entry to the venue. This was due to circumstances beyond our control and the night had to end early. Sadly a very select few on the night acted in detriment to the masses.

“After several efforts by the venue, management, police and promoters to retain order, the unsafe behaviour of these individuals raised health and safety concerns. It was decided in the best interest of the attendees for the night to end early.

“To everyone both inside and out we are very grateful that you remained calm and collected and there were no serious incidents.

“We are truly sorry and thank you all for your continued support in our mission to bring you good events.”