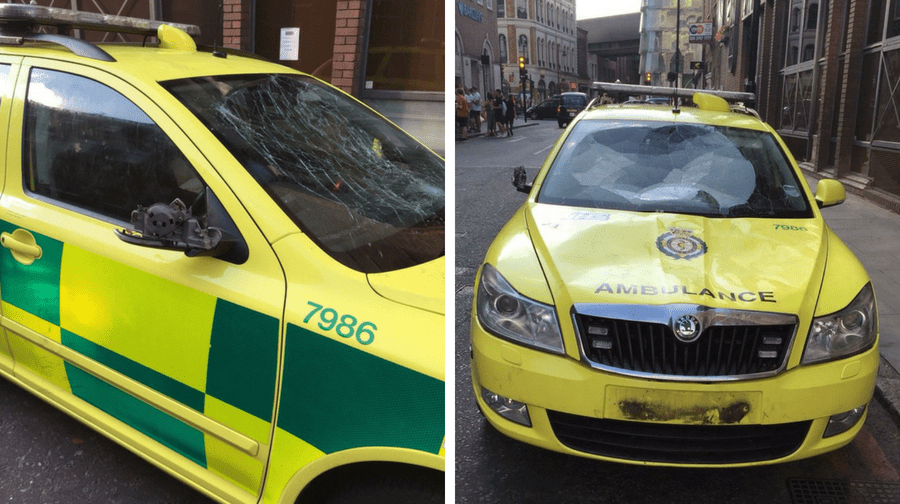 Police have interviewed a 21-year-old woman under caution after a paramedic car was trashed during World Cup celebrations in Borough.

The London Ambulance Service vehicle had its windscreen and wing mirror smashed and bonnet dented after revellers climbed on top of it while celebrating England’s win over Sweden in Borough High Street on Saturday, July 7.

Images showing people alleged to have been involved in the incident were later circulated on social media.

Detectives investigating a report of criminal damage traced a 21-year-old woman to Scotland and she voluntarily attended a police station to be interviewed on Monday, July 16.

A Metropolitan Police spokesperson told the News: “Police were called at around 5pm on July 7 to reports of a large group of people disrupting traffic in Borough High Street.

“A London Ambulance Service vehicle was damaged. The windows of the vehicle were also smashed.

“Detectives from Southwark are investigating and are aware of images circulating via social media.

“Inquiries continue to trace all those involved. There have been no arrests at this stage.”

Millwall fans have now managed to raise more than £10,000 for London Ambulance Service to help with the repairs.

After seeing a picture the ambulance service tweeted of the damage, Millwall Supporters’ Club chair Kathryn Gale and vice chair Michael Avery put their heads together and came up with a plan to help.

The pair set up an online fundraising page to help contribute £5,000 towards the repairs – but it smashed its target within 24 hours and has now raised £10,015.

Michael told the News he felt “just general disappointment” at what happened on his club’s “patch” in Borough.

“Even though Millwall fans and other clubs weren’t involved we felt like there was an obligation to help and we are the closest club to London Bridge.”

Any money raised over the supporters’ club’s £5,000 target will be donated to London Ambulance Service.

To donate to the fundraising appeal, visit: https://www.justgiving.com/crowdfunding/millwallsupportersclub