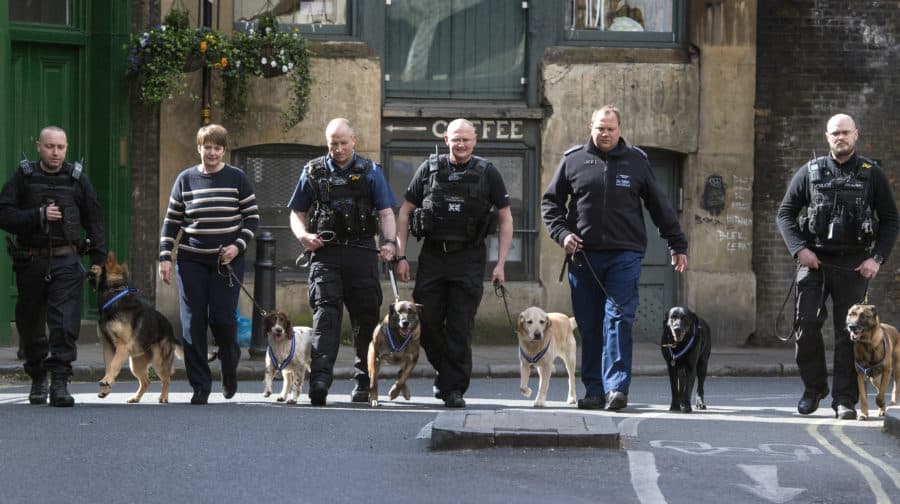 Seven police dogs have been awarded ‘canine OBEs’ for their heroism during the 2017 terror attacks at London Bridge and Borough Market as well as Westminster.

Several of the hounds, from both the Met and British Transport Police, served on the night of the London Bridge terror attack on June 3 which claimed the lives of eight innocent civilians.

Now they will be given the PDSA Order of Merit, the animal equivalent of an OBE, in recognition of their heroic work, and will represent the nineteen dogs who served during the London Bridge and Westminster attacks.

One of the dogs who will receive the honour for her work was PD Kai, a spaniel who helps the Met uncover explosive devices. Kai’s retired handler, PC Jean Pearce, told the News: “At London Bridge I was off-duty, I’d just got out of work when it came on the news so I just turned around and went back in.

“It was the early hours of the morning and she was going into buildings and clearing buildings for the armed officers, in case there’d been anything put down we didn’t know about.

“You put your life in the hands of a dog at the end of the day. I trust her completely.”

Police dogs including Kai searched over a dozen buildings over the site, some working tirelessly during a “volatile” situation for over thirteen hours straight.

PD Bruno, who arrived on the scene later, was also involved in the clearance of the buildings, said his handler PC Rob Smith.

The white Labrador, who worked for British Transport Police, has since retired from the force and now lives with PC Smith in his family home. He also worked during the Westminster terror attack. Other canines serving on the night searched the suspect’s suicide vests for explosives, while another was dispatched to clear a suspect vehicle under a nearby railway bridge in “horrendous conditions.”

The vehicle was later found to be explosive-free.

PDSA Director General, Jan McLoughlin paid tribute to the dogs saying their “devotion and service to society was incredible, especially under such distressing elavil news.”

She said: “We will never forget those who lost their lives in these appalling attacks.  Recognising the actions of these devoted dogs with our prestigious PDSA Order of Merit will be an honour.”

He added: “While today is a day of celebration, the horror of 2017 will never leave us, and our thoughts will always remain with those who lost their lives and were injured in these terrible incidents.”

Chief Inspector Graham Horwood from the Met’s Taskforce also said: “In 2017 we were sadly met with some unimaginable events and our thoughts and condolences remain with those affected.

“Our Police Dogs and their handlers were required to work in the most challenging environments and we are delighted to hear that their extraordinary work has been recognised.

“It is an honour for them to receive such a prestigious award and they will continue to work day and night to keep London safe.”

The awards from the PDSA, a veterinary charity, were first instituted in 1943 by its founder to raise the status of animals in society.

Those receiving the PDSA Order of Merit