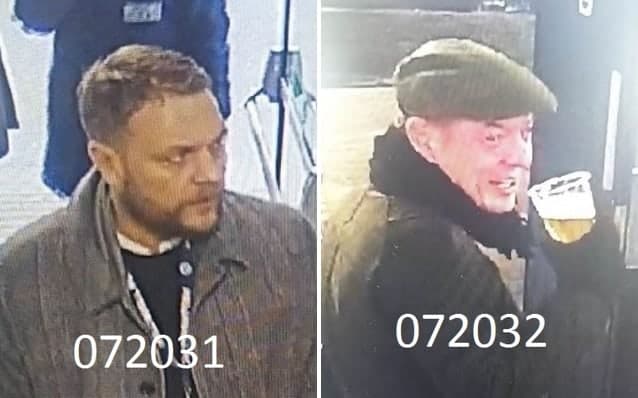 The men police want to speak to

Police officers have released the images of two men they are looking for in connection with violent scenes at Millwall’s match against Crystal Palace on Saturday (January 8).

Five people were arrested following the game, where footage is said to show rival fans fighting, players being booed for taking the knee, homophobic chants, a player being hit by a bottle and a flare being thrown onto the pitch.

Now officers have published photos of two men they would like to speak to in connection with the disorder.

Inspector Matt Ashmead, from the Central Football Unit, said: “The vast majority of football fans go to matches simply to enjoy themselves and support their team.

“Sadly, a small minority are intent on causing trouble and resorting to violence. We are committed to identifying them and ensuring they face appropriate sanctions.

“We have a close relationship with clubs across London and in this case, we have worked with Millwall to identify those involved.

“I would appeal to the public to come forward with any information that could help us to identify the two men.”

The game, which finished 2-1 to Palace, was marred by several ugly scenes.

A brawl between rival fans outside the ground forced police to intervene before the match, and booing could be heard as Palace players took the knee moments before kick-off.

In the second half, a flying bottle hit Palace midfielder Michael Olise, allegedly prompting him to taunt opposition fans.

A flare was also seen to be thrown onto the pitch from the Crystal Palace fans in the away end and firecrackers were set off by the travelling support. Millwall supporters could be heard hurling homophobic abuse at Palace starlet and Chelsea loanee Conor Gallagher, calling him a ‘rent boy’.

Millwall bosses have condemned the behaviour, alongside the Football Association, who have launched their own investigation.

In a statement released yesterday, Millwall FC CEO  Steve Kavanagh said: ‘While the absolute majority of supporters behaved impeccably and did nothing other than provide unwavering backing of their team, there were a small group of people who regrettably and depressingly overstepped the mark.”

In the statement he said the club was launching a ‘Don’t be a Tosser’ campaign and that  in certain areas of the ground – starting this Saturday – they have no choice but to start decanting all bottles into plastic cups.

He said: “This operational change will begin in the Dockers Stand (apart from Zampa’s Family Stand) and in our entire hospitality area, but in the weeks ahead this may well widen into all other areas of the stadium.

“It is essential that staff having to carry out this process are respected as it is not their choice, and while it was a difficult decision the club simply has no other option. Any abuse towards them given they are only carrying out instruction would be grossly inappropriate and will not be accepted.

“Bringing bottles into the stadium has not been allowed for some time which is a measure respected and followed by almost everyone and this is an unavoidable extension of that policy which again is designed to protect the health and safety of all in attendance, the reputation of the club and therefore the interests of the majority of supporters.”

Steve Kavanagh full message to fan can be read HERE

Anyone with information on the two men pictured is asked to call police on 101, giving the reference 3200839/22.

Information can also be provided to Crimestoppers, anonymously, on 0800 555 111.