Update: Police not investigating dramatic Bermondsey Iceland crash further as it was a ‘damage only collision’ 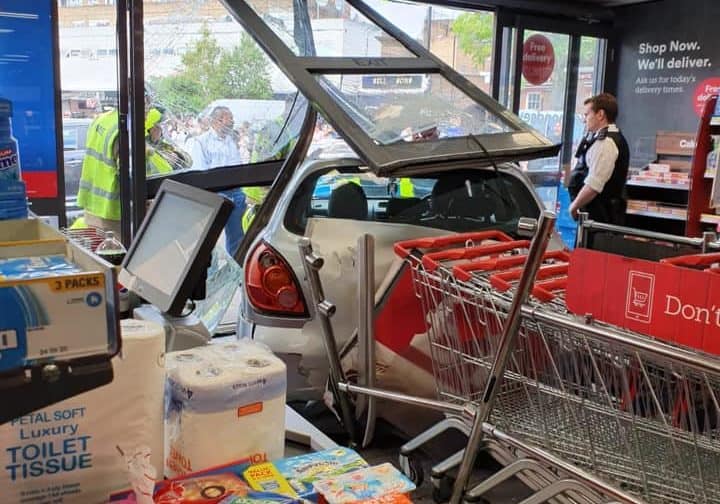 Heart-stopping CCTV footage seen by the News shows the shocking moment a car came crashing through a busy Bermondsey Iceland while unsuspecting shoppers were picking up their groceries.

The Nissan Almera driver, who appeared to be a learner, smashed through the front doors of the supermarket on Southwark Park Road at around 4pm on Friday, August 9 – missing customers by mere seconds. Eyewitnesses at the scene also told the News the driver appeared to be using crutches at the time of operating the car.

A Scotland Yard spokesperson confirmed that they had been called, but said there were no arrests in the crash.

And police told the News that as the incident was a ‘damage only collision’ it would not be looking into the matter any further.

Luckily, no-one was injured in the crash which happened after the novice attempted a manoeuvre – and instead the grey Nissan hit a sign urging shoppers to have their goods delivered. CCTV footage seen by the News showed the moment that the car crashed into the shop, missing shoppers by inches

The dramatic tape shows shocked shoppers dodging out the way of the car, which had ‘L’ plates on its front and back.

One startled customer is seen barely inches away from the vehicle.

READ MORE: ‘It could have hit me’: Shoppers shock after car collides with Bermondsey Iceland

“I was being served at the time,” one Iceland shopper who didn’t wish to be named told the News at the scene on Friday. “And all of the sudden, a car came right through the front door.

“I was the first customer when it came through, I was right by it.”

The Iceland customer was standing first in the queue – so close to where the car collided, the impact knocked the end of his trolley.

“I was a couple of feet away at most. It had come through the first window instead, it could’ve hit me, and that’s the truth of it.”

“But I’m more worried about other people than myself. It really scared the cashier.

“I’m just pleased nobody was hurt.”

Another eye-witness, Tracey, said she was about go into the store to pick up milk with her niece when the collision happened.

“A mum was coming past with her kid in a pram. If it had been a few more seconds, it could’ve hit them.”

“I think so many people are shook-up,” said a third shopper, who did not wish to be named.

“This was naturally a very shocking and upsetting incident for all those in our Bermondsey store at the time, but we are very relieved to report that none of our customers or colleagues was injured,” added a spokesman for Iceland.

“We take great pride in the calm and professional way in which our store colleagues handled the situation.

“The store has been able to remain open throughout and continues to meet the needs of the local community that we are proud to serve.”

Absolutely shocked there’s no charges against her, isn’t Iceland looking for compensation?

Absolutely shocked there’s no charges against her, isn’t Iceland looking for compensation?

Southwark NewsNewsUpdate: Police not investigating dramatic Bermondsey Iceland crash further as it was a ‘damage only collision’