'Stranger attacks are incredibly rare and we would like to urge people to be alert, but not alarmed' 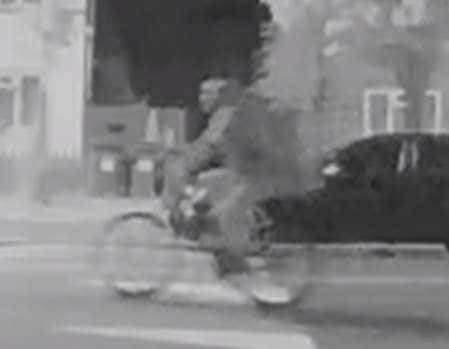 A CCTV image was released by police as they investigate a suspected rapist, who they believe could be responsible for three attacks in Greenwich and Lewisham.

Detective Chief Inspector Angela Craggs, who is leading enquiries, said: “The CCTV image shows an image of a male that we would like to speak to who we believe may be able to assist our investigation.

“If this is you or if you know who this person is, please contact us.”

Police are on the hunt for a suspect who they think may  have carried out an attempted rape in a Deptford Park, a rape on a Greenwich footbridge and another attempted rape on Blackheath Common.

Detectives from the Met’s South East Command Unit said they have ‘formally linked’ the attempted rape on the Common and the rape along a footbridge near Tunnel Avenue in Greenwich.

The attack in Margaret McMillan Park in Deptford, which officer say took place in the early hours of Friday June 7 is not yet formally linked but police ‘retain an open mind as to whether this is linked to the earlier two incidents.’

They have released an image of a man on a bike who they would like to identify in connection with their enquiries.

The image was taken by a CCTV camera in the SE10 area on Saturday, 2 June.

Though, police admit it is not of the highest quality, it shows the man is carrying an over-sized bag, possibly a rucksack, as he rides along.

At 4:30am on Saturday, 9 March, a woman in her 50s was on her way to work walking across Blackheath Common when she saw a man sitting on a bench. A bike was resting next to him.

As she got closer to him, he got up and started walking towards her with the bike.

Police say he then grabbed her and pushed her to the ground before he attempted to rape her.

The suspect then cycled away and the victim was able to get to a place of safety and police were called.

The second attack police say took place at 2am on Saturday, 2 June when a woman in her 20s was walking along a footbridge near Tunnel Avenue, SE10.

Officer said the victim described the suspect as carrying a large rucksack with a number of zips, which was possibly khaki or dark green in colour.

They said she was raped before the suspect left the location a bike.

Finally at 2.17am last Friday (June 7) police were called to reports of an attempted rape in Margaret McMillan Park, in Glenville Grove, SE8.

Officers said the victim, aged in her 40s, was walking through the park when she was grabbed from behind by an unknown man.

Police say the man attempted to rape the victim, but she managed to push him off.

He is then said to have stolen some cash from her jacket pocket before making off towards Douglas Way.

Police said a main in his late 20s has been arrested in connection with all three incidents and currently remains in custody pending ongoing enquiries.

DCI Craggs said:  “Our team are ensuring the welfare of the victims in each of these offences, and we have a well-resourced operation dedicated to locating whoever is responsible for these attacks.

“Stranger attacks are incredibly rare and we would like to urge people to be alert, but not alarmed.

“The first and second offences are being linked and it is possible that the attack on Friday, 7 June may also be linked.

“If you think you have information about the person in the CCTV image, or about any of the offences which could assist us, please do not delay in coming forward.

“Increased patrols are being carried out in the areas and we would urge anyone with concerns to speak to officers.

“We are also aware that there might be further victims who have not yet spoken to police; if you are a victim, or know someone who has been a victim of a sexual assault, I can assure you your information will be treated with strict confidence and sensitivity and we can also access specialist support where needed.”

Anyone with information is asked to contact the South East Safeguarding Team on 0208 284 8461, referencing ‘Operation Ladoga’. Alternatively, contact Crimestoppers anonymously on 0800 555 111.