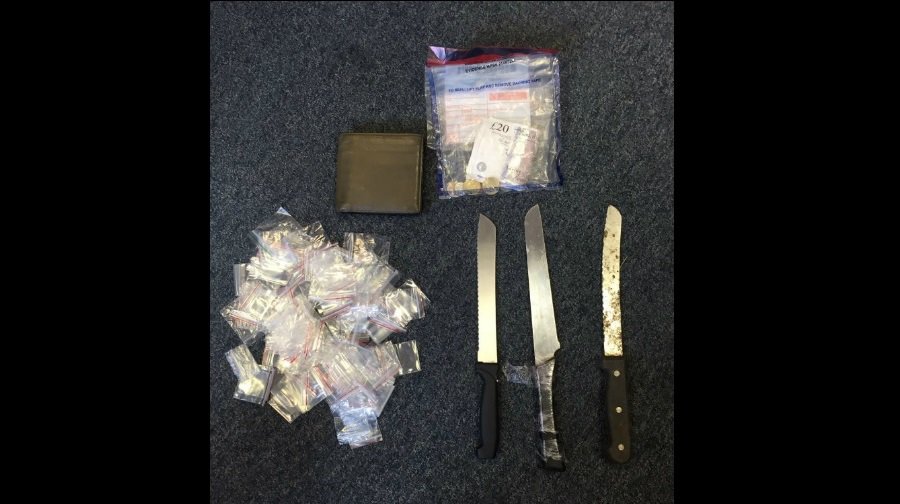 The haul of knives, cash and drugs discovered during a sweep by the South Camberwell Safer Neighbourhoods Team

Police have revealed a shocking haul of knives, drugs and cash discovered during a weapons sweep of estates in Camberwell.

Dedicated ward officer PC Michael Hughes told the News: “The thinking with gangs is that although a lot of young men don’t carry knives on them at all times, they often stash them somewhere that may be hidden, but is still quickly accessible for them.

“We do these sweeps about once a month and we find all sorts, Rambo knives, hunting knives. Typically it’s in bushes, waste chutes, or down drain pipes and water pipes.

“Although I don’t want to say exactly which estate in question, we had quite a lot of interest from certain people watching what we were doing when we found this lot.”

Pc Hughes said he believes a reduction in the use of stop and search has partly led to an increase in knife crime.

He acknowledged that stop and search could be a “controversial” strategy, but said carrying out sweeps like this could have a “great effect” on getting weapons off the streets. After the weapons are collected he said they are taken for forensics tests to check for matches on the Met Police’s DNA database.

“If we get a match between fingerprints, we can then warrant an arrest or invite a suspect in for an interview,” Pc Hughes said.

“We also have council ward officers who have handed in machetes and really nasty knives they found in a cupboard in an estate in South Camberwell.

“On previous occasions we have issued search warrants on a suspect’s home and found keys to utility cupboards on their estate. We went in and found another huge stash. We had a great result and it led to a six month sentence.”

Pc Hughes added that Southwark police would be “grateful” to hear from residents who believed there might be suspicious activity happening in their area, or a weapons stash on their estate.

Anyone with information that can help the police should call 101 or 999.