Riot police descend on Bermondsey as knifeman barricades himself in flat

A man, who police said was "armed with a large knife", had allegedly barricaded himself in his Burbage Close home this morning. 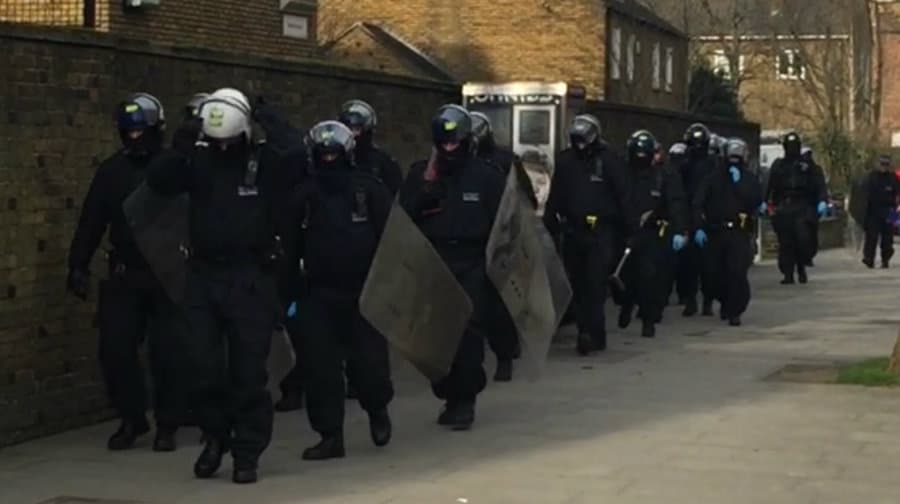 Riot police descended on Bermondsey this morning when a man armed with a “large knife” barricaded himself inside his home.

After a three hour stand-off, officers forced entry and used a taser to incapacitate the resident in Burbage Close, just off Bricklayers Arms, at around midday.

A man in his forties was arrested following the incident on suspicion of assaulting police and possessing a Class A drug.

Onlookers watching the siege unfold were held back at several roadblocks around Lyly House.

Local resident Jack Townsend said he thought there was “a riot in Bermondsey” when he woke up and saw the huge numbers of armed police swarming the area.

He told the News: “I looked out the window at around 10am and saw loads of police. I went out to see what was going on and loads arrived just as I did. It was just crazy, I thought there was a riot in Bermondsey!”

A police spokesperson had earlier said “a man had barricaded himself into the address”. They added that he was belived to be armed with a “large knife.”

The man is currently in custody at a south London police station. Police later tweeted that he had been “suffering with mental health issues” and had been taken for an assessment by trained mental health professionals.

No-one was injured during the incident.

Good luck to @MPSSouthwark & I hope no one is hurt in ending the current ‘siege’ in Bermondsey: https://t.co/RUjnQQ2Kj5

Thank you to residents of Barbage Close for bearing with us whilst we dealt with a situation which has been peacefully resolved. Cont….

An officer with ramming equipment at the scene (Photo: Jack Townsend)