“For someone to come in and take from other people that are trying to give to charity is unbelievable," said the business 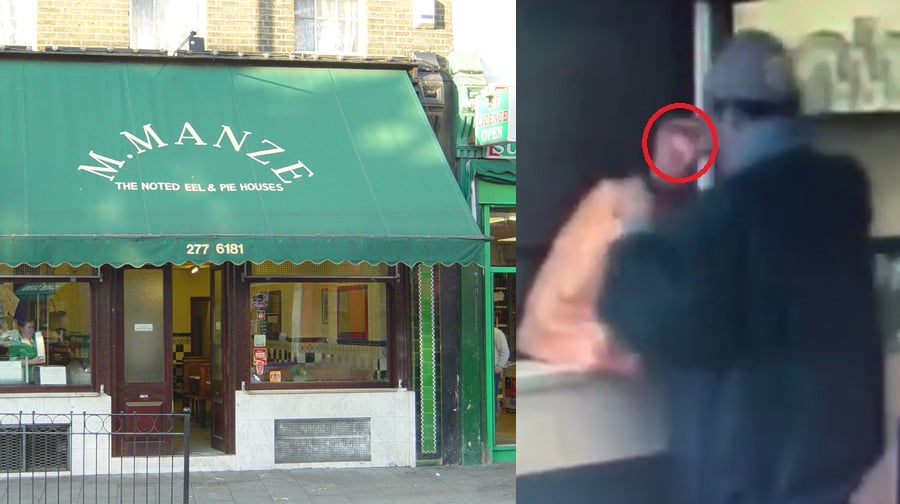 Left, the shop and right, the moment the man appears to steal a poppy appeal collection tin

Money from the tin, donated by customers at Manze’s traditional Pie ‘n’ Mash shop on Peckham High Street, would have gone towards the Royal British Legion’s appeal for members of the Armed Forces Community.

The apparent theft comes just days before Remembrance Sunday on November 10, where the nation marks two-minute silence for all those fallen in the world wars and other conflicts.

CCTV footage from the business and shared with the News appears to show a man sneakily swiping the unchained tin shortly after 2pm on Saturday and placing it into an orange carrier bag – while hardworking staff clean tables nearby.

He then looks over his shoulder as if to check whether he has been seen – before strolling out of the family-run shop as if nothing has happened. The moment the man appears to steal the poppy collection tin

“It’s absolutely shocking,” said Manze’s director, Tom Harrington. “It’s all of our customers that have given to charity to remember this time.

“For someone to come in and take from other people that are trying to give to charity is unbelievable.”

“It’s absolutely shocking,” said Manze’s director, Tom Harrington. “It’s all of our customers that have given to charity to remember this time.

“For someone to come in and take from other people that are trying to give to charity is unbelievable.”

Staff at Manze’s realised the missing tin on Monday, and went to check the CCTV to see how it had disappeared, only to see the man appearing to steal it for himself.

“He’s gone in and put it in a bag and then gone out again, so we’re going to chain it up going forward,” said Mr Harrington.

“It’s how we’ve always had the money box set up, but I think at that moment in time he spotted the opportunity and no-one saw what he was doing.”

He added that the business wanted to “raise awareness” of the man’s actions, so that other shops in the local area could be on-guard for would-be criminals stealing their charity boxes.

“We all need to be extra cautious,” he said. The Met confirmed it is investigating a report of poppy tin theft, but said no arrests have yet been made.

“An online report of theft of a charity box from a commercial premises in Peckham High Street was made to police at about 12:30hrs on Monday, 4 November,” said a spokesperson.

“The theft is reported to have taken place at about 14:35hrs on Saturday, 2 November.”

Now the business has not yet gotten a new poppy appeal tin, but said customers are still donating, with the cash being kept securely.

It has also donated £50 to the Legion to replace the cash that was taken.

The popular shop urged customers to continue donating to the poppy appeal, which can be found online here.

“We are very disappointed that this has happened in our shop,” added the director.