No England games are to be shown at the park, which is still free to enter 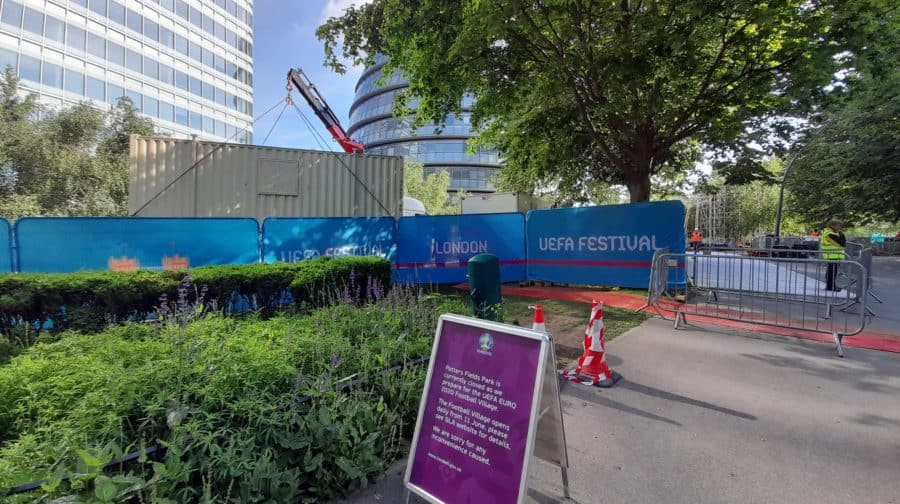 Potters Fields is being transformed into one of two London fan parks for the upcoming Euro 2020 international football tournament, which starts this week – without any England games.

Up to 2,500 people will be able to fit into the park next to Tower Bridge, according to the mayor’s office. Thousands of people are expected to come into the ‘football village’ throughout the day. The site will be open from 11am-10pm every day during the tournament, which runs from June 11-July 11.
Large screens will show every game of the tournament other than England matches and games that kick off at 8pm on Sundays. That means between about 40-45 games will be screened, depending on how far England progress. No England matches will be screened, because organisers said that meant they would have to run a ballot and issue tickets.
Organisers say they want the site to have a family atmosphere. They say this will be fostered by family-friendly activities like a virtual reality goalkeeper game, skills arena, opportunities to meet the mascot, ‘hangout spaces’, picnic tables, and an official fan shop for the tournament. The site will also have bars, food stands and toilets, as well as a first aid area.

Letters were sent to local businesses and residents in February and at the end of May. Locals were also invited to an engagement meeting in March. A representative of the Shad Thames residents association said the consultation went well.
The news comes after locals have complained of prolonged bouts of violence, drug dealing and other anti-social behaviour at Potters Fields Park since lockdown restrictions began to ease about three months ago. Police recently released photos of two men they want to speak to in connection with a stabbing outside City Hall in April.
London is one of eleven host cities of Euro 2020, which is taking place a year late because of the Covid-19 pandemic. Both semi-finals and the final will be played at Wembley, as well as five other games.

Alongside Potters Fields, Trafalgar Square will serve as a fan zone for the tournament, showing every England game as well as the semi-finals and final.
The zone is free and run on a first come basis. Anyone who has more questions can get in touch with organisers at fanzones@jackmorton.co.uk.

So this is what our council tax rise of 9% is being used for . It will just be full of drunk male louts from all countries and no doubt a lot of fighting . Meanwhile no police officers to deal with it . 2500 people …how come football does not have to abide by covid rules ?