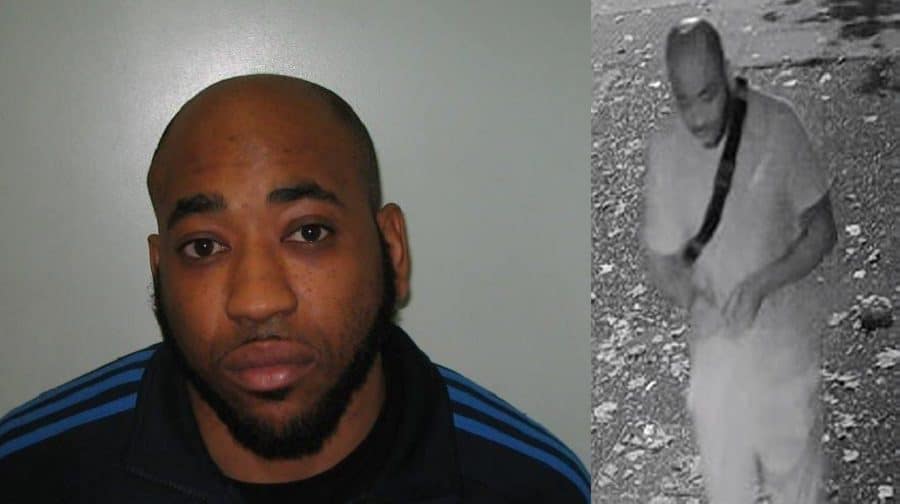 Left: William Gordon in custody; right: an image circuated as part of the appeal

A predator who chased and repeatedly sexually assaulted a woman on the streets of Walworth and then tried to get the News to take down CCTV footage of him, has been jailed for thirteen years.

William Gordon, 34, convicted of beating and sexually assaulted, approached his victim in a terrifying early morning attack in Larcom Street on August 6, 2019.

The Old Bailey heard how Gordon, of Elephant and Castle, followed his victim along Larcom Street as she walked in the direction of Charleston Street and sexually assaulted her for the first time.

The victim managed to get away – only for Gordon to chase her to nearby Cotham Street and sexually assault her again.

Jurors at the Old Bailey heard how his victim cried out and continued to escape the attack.

Her cries alerted people in nearby houses and Gordon fled the scene when they came out to help.

Incredibly, when police launched a CCTV appeal showing their suspect, Gordon brazenly contacted the News to insist we take down the appeal.

He insisted that he was the man in the photo, but that police had eliminated him from their enquiries. This was not the case.

Yesterday police confirmed that the phone making these calls was directly linked to Gordon.

The appeal also revealed that the 34-year-old had followed another woman a week prior to his attack.

DI Sharon Steele called Gordon, who has previous for sex offences, ” a manipulative sexual predator who poses a serious danger to women.”

“That night he was clearly targeting lone females before pursuing his victim through the streets and carrying out a sustained attack,” said DI Steele.

“Gordon then failed to acknowledge any wrongdoing and forced the victim and witnesses to relive the traumatic events of that night throughout the trial, during which he also disputed his previous convictions for sexual assault.

“However the jury saw through his lies and this dangerous offender has now been held to account.”

She also paid tribute to the victim’s bravery during the ordeal, saying her courage had ensured Gordon was brought to justice.

The DI added: “I would like to express my sincere gratitude to the media and the public for all their help in identifying Gordon – it was due to their response to our appeal that he was so quickly arrested.”

He was sentenced yesterday for four counts of assault by penetration; one count of sexual assault and two counts of common assault by beating.

He had previously been found guilty of the offences after a six-day trial in February.