Pride of Nunhead: Boys aged 6 and 7 organise food collection for people in need 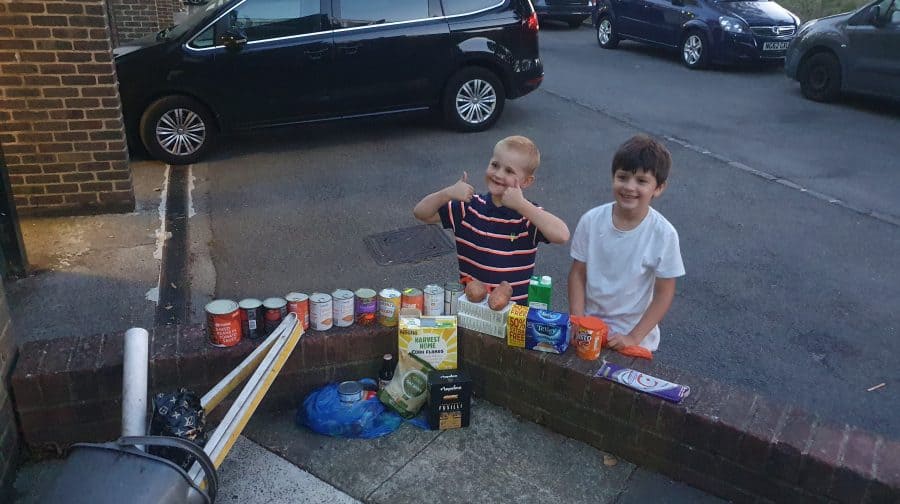 The boys out collecting donations

Two primary school age friends from Nunhead are the pride of their estate after organising a food collection for the homeless and people in need.

Proud mum Lacey Wills, from Linden Grove, told the News she was over the moon when she saw her boy Frankie, aged 7, and his best mate Samuel, 6, with a big bag of donated food they had collected from their neighbours.

She explained: “I didn’t know what he was doing until I saw him with a bag in his hand. Then when I asked he said ‘just trying to help the homeless and people who need more food’. The boys donating their items

“They took it upon themselves to knock on their neighbours doors on the estate we live in, going from door to door collecting donated food.

“They introduced themselves and said they had made up their own charity for the homeless and less fortunate to gather nice food to eat.

“If someone said they didn’t have anything, they just said “that’s fine, thank you and have a good evening.”

Their donations were passed on to Nunhead Knocks’ food bank,  where they will help feed people who are shielded from the virus at home or have lost their jobs or are unable to work due to the virus.

And, the response from their community was so positive they are now holding the collection every week. Frankie and Samuel visiting their neighbours

I’m so glad that the boys are doing well in ther collection of food for the unfortunate. Age 6 and 7 how sweet they are to take ther time out to do such a good thing for the unfortunate I’m very proud to have such a brute nephew in frankie what lovely boys they are x good jobs frankie samuel x

This is wonderful news well done! I just love: “They introduced themselves and said they had made up their own charity for the homeless and less fortunate to gather nice food to eat.
“If someone said they didn’t have anything, they just said “that’s fine, thank you and have a good evening.”

Frankie and Samuel your spontaneous selfless charitable action I hope will inspire other children and adults.

I applaud Southwark News for sharing this wonderful story and since the lock down other positive community initiatives.