PRIDE SOUTHWARK: Coming out – as a gay educator

“Bearing in mind it was a primary school,” he explains, “Seventy five per cent of our students were experiencing homophobic bullying on a daily basis. Whether or not they identified as LGBT+, they were being called queer, faggot, batty boy, lezza.” 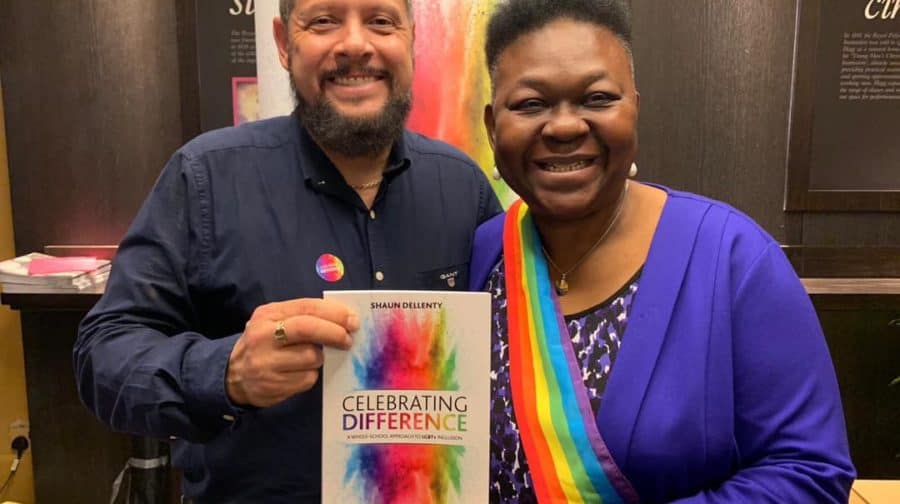 Former Southwark primary school teacher Shaun Dellenty made headlines when he came out during a school assembly in 2009. Since then, he’s pioneered a new age of inclusive education around the world. As his first book is released, the reluctant LGBT+ hero describes how a moment in Rotherhithe changed his life – and the education system as a whole, writes Cara Cummings…

In 1985, Dr. Who saved Shaun Dellenty’s life. Having come out disastrously to a teacher – “I told him I was gay and he physically moved away from me” – after years of chronic homophobic bullying, the now award-winning LGBT+ inclusion advocate locked himself in his parents’ bathroom, determined to take his own life.

“I had the razor blade over my wrist. I was that close. But I suddenly thought: what would the Doctor do? He’d get in the Tardis, go forward in time and see how things turn out.

“So mentally, I got in the Tardis and pictured going forward to a day when somebody could walk into a school and be loved and accepted for who they are.

“I know it sounds geeky,” says the unassuming icon of LGBT+ education. “But that’s why I do what I do.”

Sat in a Borough cafe, reflecting on a decade of pioneering inclusion work and with his first book on the table between us, Shaun’s clearly come a long way from that bathroom moment.

His innovative inclusivity training, developed during a stint as deputy head of Rotherhithe’s Alfred Salter Primary and delivered to more than 40,000 education professionals and counting in the UK alone, has seen Shaun designated a ‘Point of Light’ by former Prime Minister David Cameron and won him Southwark Mayor’s Highest Civic Honour.

He’s helped establish inclusive cultures with the Church of England, Amnesty International, and the Houses of Parliament; broken new ground in LGBT+ education for faith schools across the religious spectrum; and even helped shape an entire youth services overhaul on the Isle of Man.

Now the warm, whipsmart equality advocate has published Celebrating Difference, a memoir-infused toolkit for building educational environments in which everyone can thrive – pupils, staff and parents included – regardless of their identity.

How has the humble former deputy head transformed a childhood marred by chronic homophobia into something so far-reachingly positive?

“Homophobic bullying has affected me throughout my life,” Shaun says squarely.

“Those experiences at school defined me. Punching, spitting… The most painful thing was the graffiti.

It was a small town; they’d get permanent pens and write ‘Shaun is queer’, using my full name, over the bus shelters, the shop fronts, the street signs… It was everywhere, all of the time.

So it was a conscious choice to say: Do you know what? F*** off. You’re not hurting me anymore.

“I will learn from this, then I will go out and face the future as positively as I can.”

But if it wasn’t for a single pupil survey during his time at Alfred Salter Primary, Shaun’s story – and the British education system as a whole – might be very different today.

In November, 2009, his Rotherhithe pupils filled in a routine questionnaire about bullying within the school.

“Bearing in mind it was a primary school,” he explains, “Seventy five per cent of our students were experiencing homophobic bullying on a daily basis. Whether or not they identified as LGBT+, they were being called queer, faggot, batty boy, lezza. Being told they’d die of AIDS. Being told their parents would die of AIDS.

“Ninety eight per cent were hearing the use of the word ‘gay’ as a negative term.

“I can still see myself in the office, looking at these questionnaires. I wanted to cry. I went right back to the day I locked myself in that bathroom and thought – if I imagine any of these kids getting to that point, then I’ve failed in my job as a school leader.”

Shaun made a decision that would change his life – and education in the UK – forever: he designed and delivered Alfred Salter’s first LGBT+  inclusion training, and came out to the entire school during an assembly.

That made him the first openly gay primary school teacher in the entire country.

“It took some soul-searching,” explains Shaun, “because I lived near the school and at that point the National Front were quite active; there were links with a minority of parents. I did question whether it would be safe for me to come out… but it wasn’t about me. It was about the kids.

“If I’d buried that data because it was uncomfortable, then I do not deserve my job. Because that data was about pupils suffering.

“You don’t go into teaching to validate only some children – the ones that align to your personal, political or theological point of view. You do it because you care about all children. And I believe if you don’t, go and get a job somewhere else.”

Shaun’s actions at Alfred Salter quickly caught the attention of the national press. Before long, other schools – including many faith schools – were getting in touch.

The radically tolerant, dialogue-based approach he’d created at Alfred Salter has now travelled around the world. “It radiated out from Southwark”, he says simply.

“What makes my work different is that it’s based on the human potential for prejudice that’s in all of us,” Shaun explains.

“It’s essentially about saying, ‘Let’s just stop. How do we really feel about prejudice, and human diversity? Are we saying that we’re OK with it, when we’re not?’

“When you open up about that in a non-judgemental way, people relax. And then you can go underneath all of the stuff we’re supposed to say and do and actually get to what’s really there – which often is prejudice, and misconception, and fear.

“For me, that’s the bigger win. Because once you externalise it, you can work with it. If we don’t do that in primary school, all of those prejudices are going to become ingrained and compounded.

“It’s not about political correctness; it’s compassion. It’s kindness. It’s making people feel that they belong, not that they should be driven away.”

Shaun isn’t partisan when it comes to who he works with. Whether state, private, or faith-based – every school gets the same direct, honest approach.

“All I’m talking about is human diversity,” he says.

“We talk about animal diversity from the start of education. We talk about volcanoes, and polar ice caps, and lakes and mountains.

“Then we talk about the fact that some people are black, disabled, Muslim, have no faith, love somebody of the same sex or maybe feel like they’re born in the wrong body – and suddenly we all get scared and angry. What the hell’s going on there? Why is that not appropriate for a primary school?”

It’s a question Shaun’s found himself increasingly being asked over the last few months, as protests against LGBT equality teaching in two Birmingham primary schools have hit the headlines.

Teachers at the schools in the city have come under fire from parents over inclusive curriculum content – a situation Shaun fears has been overtaken by external forces.

“I am absolutely for freedom of speech and the right to protest, but what you’ve now got is anybody with a grudge against LGBT+ people rocking up to cause as much trouble as they can for those poor teachers, who are just trying to put their young people first.

“From the outset I thought, ‘Don’t let this become about faith’. Because the minute that happens, it becomes a battle between LGBT+ people and faith. There are enough forces in the world trying to tear us apart at the moment; don’t let it become that. ‘Us versus them’. That’s just wrong.”

Shaun’s determined to see the positive in the maelstrom, however.

“What’s happened in Birmingham is awful. Those teachers, students and a lot of parents have gone through hell. But out of that has come greater discourse about what it means to be LGBT+ and Muslim. So although I’m desperately sorry for those people involved, there is some good because it’s a conversation that needs to happen.”

For Shaun, the power of dialogue is needed now more than ever. His work may have pushed attitudes forward, but he’s experienced more hostility during the last 18 months than the previous eight years put together.

“Where we are now is really worrying,” he says. “Speaking out against minorities seems to be being modelled by politicians – including our potential prime minister [Boris Johnson] who’s called gay people ‘bumboys’.

“What happens as a result of people using hate speech is this empowerment of other people thinking, ‘Well, we’ll use it too.’

“The world seems to be getting nastier. Not all of it, but there does seem to be more robustness in terms of the challenges. But for me, you counter the dark with light.

That mission still drives Shaun every day – and fuels his unrelenting optimism about the future, despite the challenges of today.

“I’ve got real hope,” he says simply. “Yes, I’m worried about what’s going on but I think when these young people come up and through – they ain’t going to stand for this s***.

“Children have got to remodel the world. They have to. This planet is in a dire state, and yet we’ve got these ongoing disputes about ‘you believe this, and I believe that’ or ‘you love this person and I don’t like it’ – we’ve done it. And we’ve done it enough. Children have died.

“We have to keep readdressing the dark. And if I can help do that, and keep children safe at the same time, then I’ve done my 17-year-old self proud.”

What else would 17-year-old Shaun make of his life now?

Southwark NewsNewsPRIDE SOUTHWARK: Coming out – as a gay educator