The service at The Most Holy Trinity Church will start at 11.15am this morning 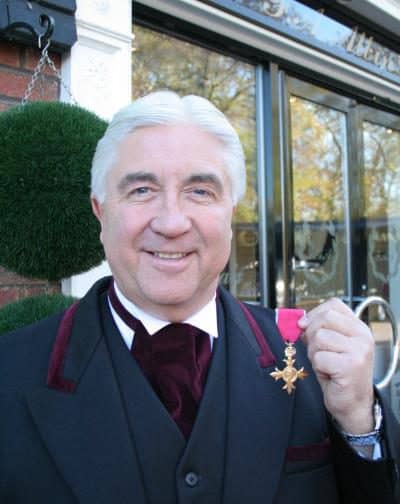 A quiet respect hangs over Bermondsey this morning as mourners prepare to say goodbye to community stalwart, Barry Albin-Dyer.

The funeral cortège will leave the Albin’s office in Culling Road at 9.45 and follow a route marking some of the milestones of Barry’s life along the way, due to arrive at The Most Holy Trinity Church at 11.15am.

Priests will come out and give Holy Communion to the crowds who are expected to gather outside the service in Dockhead, where screens have been erected to show the ceremony inside.

The F A Albin ‘family’ would has extended an open  invitation to local people to come to the church and be a part of their final farewell to the late, great funeral director.

The first stop for the funeral procession will be at Barry’s home in Sovereign Crescent, where a flower will be laid on the doorstep. After going down Jamaica Road the next stop will be in Salter Road at the old home of Fisher FC – which Barry gave a lot of time and money to over the years.

There will be a pause for ten minutes in the Blue market square where doves will be released and an audio recording of Barry reading the poem Bermondsey, my Bermondsey, will be played.

The cortège will also pass by where the original F A Albins was in Snowsfields and the branch which Barry lived above as a young boy in Old Jamaica Road.

Following the service, Barry will be laid to rest in a private ceremony at the Albin’s memorial garden.

The route the funeral cortege will take on the way to the Most Holy Trinity Church, Dockhead on Saturday morning