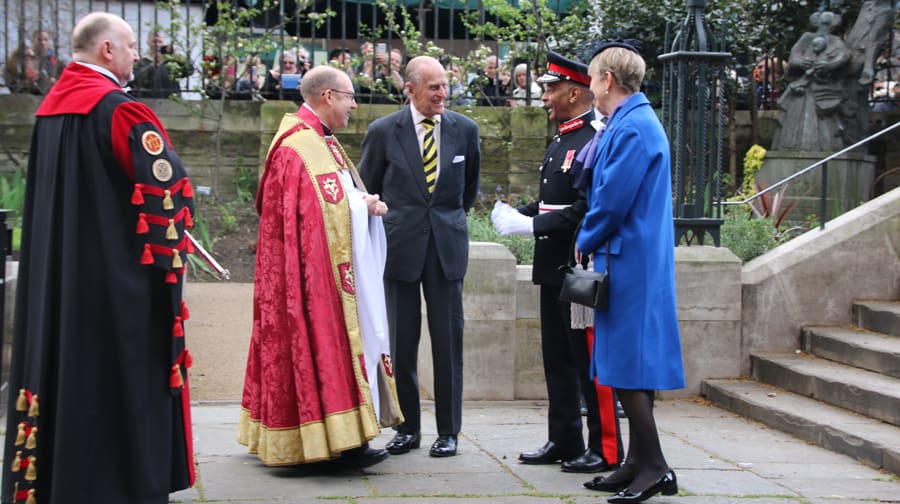 The Duke of Edinburgh with (left to right) Paul Timms, Dean of Southwark’s Verger; The Very Revd Andrew Nunn, Dean of Southwark; Mr Kenneth Olisa OBE, The Lord-Lieutenant of Greater London and Mrs Caroline Chartres, wife of the Bishop of London at Southwark Cathedral in 2016 Photo:Southwark Diocesan Communications

Tributes to Prince Philip, the Duke of Edinburgh, have been shared by politicians, charities and arts organisations in Southwark after he passed away today aged 99.

A statement from the Royal Family said: “It is with deep sorrow that Her Majesty The Queen has announced the death of her beloved husband, His Royal Highness The Prince Philip, Duke of Edinburgh.

“His Royal Highness passed away peacefully this morning at Windsor Castle.”

In a statement from Downing Street, Boris Johnson said the nation was  ‘united in grief and gratitude’.

The duke’s death comes just weeks after he ended a lengthy stay in hospital for an infection and pre-existing condition, and received heart surgery.

During his lifetime he developed a reputation as both one of the most accomplished members of the royal family, and hardest working. He will also be remembered for his gaffe-prone sense of humour.

At the time of his death he had been the Queen’s consort for 73 years.

a loyal and steadfast companion and support to her throughout their long marriage. I would like to extend our borough's deepest condolences to Her Majesty, and her extended family at this sad time.

My sincere condolences to the Royal Family. An extraordinary contribution made by The Duke of Edinburgh, over many decades, in an extraordinary role. https://t.co/wYOZiLvFx5

We are deeply saddened to hear that HRH The Prince Philip, Duke of Edinburgh has passed away. Prince Philip served as our Patron for over 40 years. His support for our founder Sam Wanamaker was integral to building the Globe Theatre and later, opening the Sam Wanamaker Playhouse. pic.twitter.com/Zb8heoKm2Z

We are saddened today as we mourn the loss of His Royal Highness Prince Philip, Duke of Edinburgh. Our thoughts are with The Queen and the @RoyalFamily.

We are sadden to hear of the passing of HRH Prince Philip, Duke of Edinburgh.

Our deepest condolences are with Her Majesty the Queen and the entire Royal Family.

As a mark of respect, our flag will be flying at half mast. https://t.co/pGEz7JbEeT

This is a sad day for the UK. HRH Prince Philip was a dedicated public servant,supporting many charities throughout his service. He was the perfect consort to the Queen.

Losing someone no matter their age is never easy. My deepest condolences to the Queen and the Royal Family? https://t.co/8XSz48W5h0

A statement from the Mayor of London on the passing of His Royal Highness The Prince Philip, Duke of Edinburgh. pic.twitter.com/Vnlc9GdER8

IWM is hugely grateful to HRH The Duke of Edinburgh for the generous support and interest that he has taken in IWM during his lifetime. pic.twitter.com/UkpFOQEKnj

we were particularly honoured to welcome him to HMS Belfast in 2007 and again in 2010, when he attended the dedication of the ship’s new masts in a ceremony with veterans and officials from the Russian embassy and government.

Following the passing of HRH The Duke of Edinburgh we have lowered the flags on the council buildings to half mast https://t.co/aLYDsp3UUp pic.twitter.com/j2jiCf27I2