'London Bridge station will be the beating heart of the Thameslink, offering thousands of commuters more frequent and reliable services' 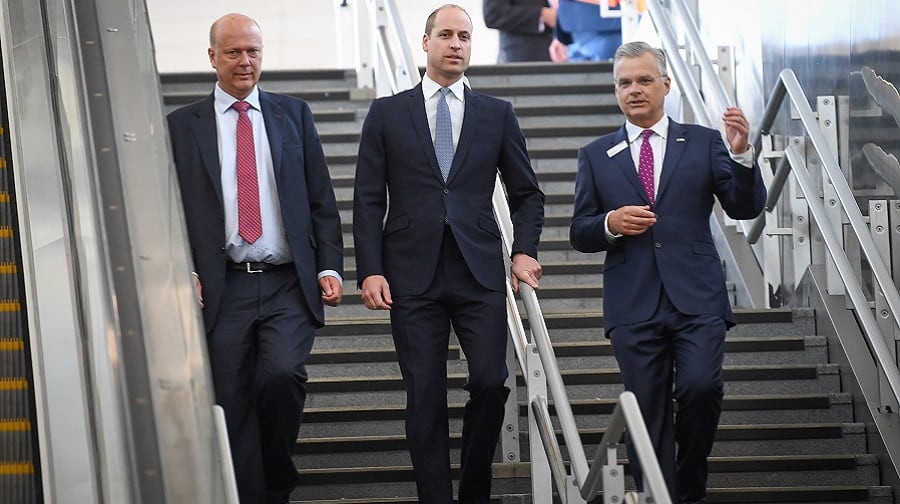 He then met groups of apprentices, project leaders and staff involved in the five-year transformation which has almost doubled passenger capacity and is designed to enable more and faster connections for passengers.

Work has included a major track upgrade, a new rail underpass on the approach to the station, and platform widenings and extensions meaning 30 per cent more trains can use the station than before.

For the first time in over 150 years, passengers at London Bridge – which was built in the 19th century as two separate stations – are able to reach all fifteen platforms from one concourse.

Two platforms are dedicated to the Thameslink service which allows a significant uplift in services able to stop and pass through the station, carrying more carriages before and reaching a 138-station network stretching from Bedford to Brighton. The Thameslink programme – a partnership between the Department for Transport, Network Rail, Govia Thameslink Railway, Southeastern and Siemens – has created the largest street-level station concourse in the UK.

Transport Secretary Chris Grayling MP said: “We are indebted to the thousands of men and women who have built a modern, accessible and iconic station fit for London’s future, and the patience of passengers who will now see a transformation in their journeys.

“Thanks to government-sponsored investment, London Bridge station will be the beating heart of the Thameslink, offering thousands of commuters more frequent and reliable services, with modern new trains using pioneering world-first technology to enable better journeys across the entire route.”

Network Rail chief executive Mark Carne added: “This station has been rebuilt from its Victorian foundations upwards, while still providing a service for the 48 million people who use it every year, to be delivered on the very day we said we would five years ago. “This is a station that represents a transformation in passenger experience, a catalyst for economic growth and a world first in the use of Digital Railway technology demonstrating our vision of the future.

“I give my thanks to the great people and great teams behind this fantastic project, as well as to our customers for their patience and understanding during these major works.”

The fifteen new platforms were completely rebuilt and the number of ‘through’ platforms has increased from six to nine during the reconstruction.

This has enabled the creation of two platforms dedicated to the expanded Thameslink service which connects 138 destinations from Peterborough, Bedford and Cambridge in the north, to Brighton, Littlehampton, Horsham, Rainham and Maidstone in the south. With public access through entrances to the north, south, east and west, the station is filled with more than 80 new shops, cafes and restaurants, creating hundreds of jobs and boosting economic growth in Southwark.

London Bridge remained open to passengers throughout the works but Wednesday’s ceremony marked the completion of the project.

Minor finishing works are still taking place at the Tooley Street entrance but these are expected to be completed by June.