Year 11 girl was nominated for supporting her fellow students, "offering them sound and positive advice" 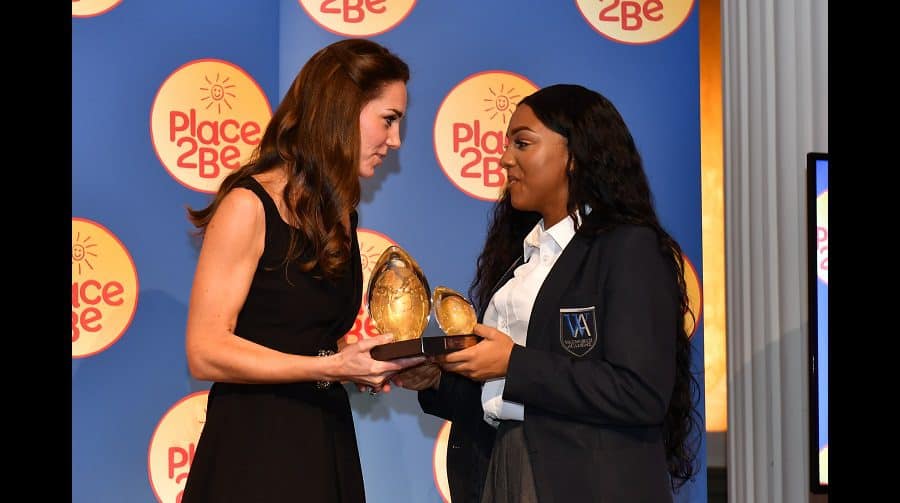 The Duchess of Cambridge presented a Walworth Academy pupil with a mental-health charity’s Young Person Champion Award on Tuesday.

Sixteen-year-old Kaii Bailey was nominated by the school for her “amazing resilience and determination” in supporting and advising her fellow pupils.

The generous teen said: “I was so overwhelmed, it was really unexpected.

“I am so thankful to everyone at my school and Place2Be [a charity for mental health in schools] who supported me.”

When nominating her, the school wrote that Kaii regularly offered “sound and positive advice” so that pupils “could make the best choices”.

In her speech to the ceremony held in Mansion House, Princess Kate, the royal patron of Place2Be, said: “I have been privileged over recent years to visit a number of schools and meet the teachers, volunteers, and parents who make Place2Be’s work a reality.

“Together, you ensure your students know they have somewhere to turn, someone who will listen, or simply a safe place to escape.”

Two fifteen-year-olds from Walworth Academy, Beatriz Mendes and Cameron Stutely, were chosen as the only two children on the panel of judges.

Principal Yvonne Powell OBE said: “We have worked closely with Place2Be to create a safe, happy and caring environment for all staff, students and parents. A culture which encourages students and staff to ask for help is a key part of the school’s ethos, and is well embedded into the culture.

“Students know that school staff genuinely care and will do what they can to remove barriers to happiness and success.”

Before the ceremony, Place2Be’s partner schools were invited to nominate their school leaders, teachers, support staff, parent champions, child champions and Place2Be counsellors who “go above and beyond” to enhance their school community.

The winners in the nine award categories were selected from almost 100 entries, and were announced in front of 350 guests.