Stephen Carr never spoke a word of his traumatic ordeal until he spoke to News reporter, Will Pavia, in 2004 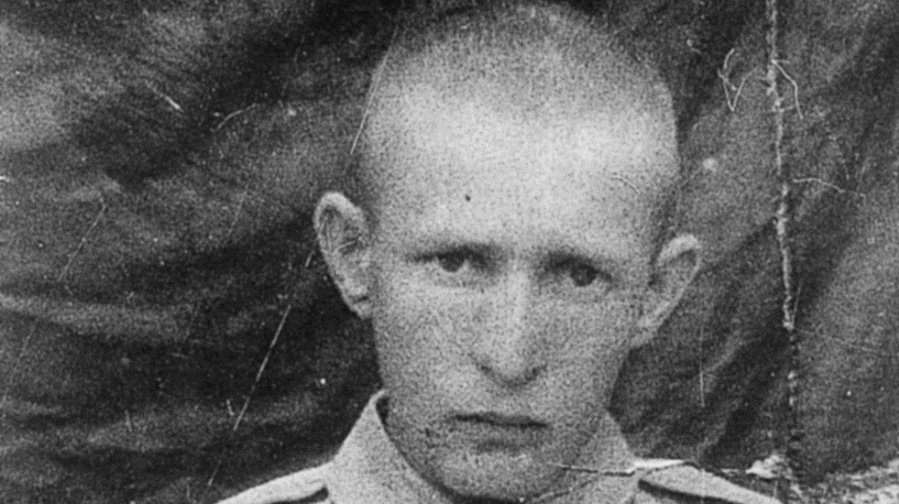 Seventy years ago today (Thursday) a postman from Rotherhithe being held as a prisoner of war watched a cloud of smoke mushroom into the sky as the atomic bomb hit Hiroshima.

“I saw it,” Stephen Carr told News reporter Will Pavia the year before he died, as he exclusively revealed the horrors he had seen behind enemy lines, which he had previously kept from his friends and family.

To mark Victory over Japan day next week, his family has asked us to share his remarkable story once more to remind us of the sacrifices made by soldiers like Stephen.

In August 1945 Stephen was on a mountainside in Japan collecting wood. “I say to the fella I was with: ‘Look at that.’ A great cloud. That was the bomb.”

He was a hundred miles from Hiroshima. “Everything went quiet after that,” he said. “All the guards disappeared.”

By that time the Norfolk-born soldier had survived three years of the most brutal Japanese prisons and the Thai ‘death railway’.

“I put it down to the fact that I am only a small fella,” said Stephen. “It was the big lads that died first. Mine was only a small stomach. And I resolved not to think about home at the beginning when I was first captured. I thought, this is no good. I have got to watch my own. I received a letter from my wife in 1944. It was posted some time in 1942. It didn’t say much because they weren’t allowed to say much, but I was glad because then I knew she was alright, see.”

Stephen was taken prisoner when the British surrendered Singapore Island in February 1942. The Japanese had invaded and Stephen was in a slip trench mounted on a Vickers Machine Gun, covering the track which led to the village. “The signal trench was just a few yards behind me. I heard them say: ‘At four o’clock we will surrender.’”

Stephen joined the Territorial Army in 1933 and was shipped out to Singapore in 1941 to reinforce the island base at the bottom of the Malay peninsula, regarded by military chiefs as an ‘impregnable bastion ’vital to British interests.

As Stephen and his comrades were sailing to their post, Japanese High Command ordered the invasion of Thailand, Malaya and the Philippines, while simultaneously launching a strike on the American fleet stationed at Pearl Harbour.

British Army chiefs still assumed the ‘little men’ army would be no match for the British bulldog as they reinforced their sea-facing defences.

But sixty-five thousand battle-hardy Japanese troops took them by surprise when they advanced through the swamps and jungle of Malaya towards Singapore, building a ruthless reputation as they went.

They travelled on stolen bicycles, killed captured wounded and slaughtered those who surrendered.

Two of Britain’s leading warships were sent north to meet the invasion – both were sunk.

Ninety thousand allied troops, many of whom had not seen battle before, were faced with an army of trained killers who had been exhorted to “think of yourselves as an avenger coming face to face at last with his father’s murderer. Here is a man whose death will lighten your heart.”

Stephen arrived in Singapore on January 13 1942 and was immediately confronted with the brutal reality of war as a battle-weary soldier from the Argyle and Scottish Highlanders took a seat beside him in the Officer’s Mess.

As he handed the filthy bloodied soldier a beer, Stephen’s name was called out by the Sergeant Major, ordering him to gather up fifty rounds of ammunition.

As a ‘spare man’ in the battalion, Stephen could be employed as a range taker, a Vickers Machine Gunner or a battalion runner, carrying messages from camp to camp.

“We drove straight across the causeway into Malaya ninety miles up to a place called Yong Ping. That was where the Japanese were.”

Word came of a Japanese attack on D company on a nearby hilltop. A group of Indian soldiers were sent in to assist, but an hour later they returned carrying their dead commanding officer.

Everyone was ordered to fall back but the next morning the convoy was ambushed and split up. Stephen was sent to run a message to the other half of the fleeing troops telling them of a patrol boat on route to pick up the wounded.

“I was running on a track by a river and on the way back I got sniped at but I never got hit.”

He was then sent in a group of five to attack the enemy. Most were killed or wounded and Stephen narrowly escaped death when he got out of a truck just before it was hit by a mortar.

The order came to head for the coast so the remaining soldiers made for the jungle, wading through the swamps before they were picked up by a Malay patrol boat.

“I was caked with mud. A British soldier was handing out half a cup of rum and corned beef sandwich on the deck. I took mine up and lay by the chimney stack on my back. I must’ve gone right off because I didn’t wake up till we got to Singapore. When I opened my eyes there were two military police. One had his boot in my ribs. I said ‘What’s the matter?’ The other said: ‘He’s not dead.’ My legs were so caked in mud they had to carry me off.”

As the Japanese stormed the causeway, Churchill issued a chilling order to his generals: “There must be no thought of sparing the troops or population. Commanders and senior officers should die with their troops. The honour of the British Empire and the British Army is at stake.”

Stephen was on patrol with Nepalese Ghurkas, covering the approach to the village when word came of surrender.

“I felt disappointment and relief in a way,” he said. “At everything being quiet. They wanted us to clean all the weapons but we just slung them in a heap. I said to the Sergeant Major: ‘I haven’t got to clean this machine gun have I?’ He said: ‘Yes of course.’ When he left I put a bit of sand in all the working parts, went to a pond and slung it in there.”

Stephen was one of 100,000 men taken prisoner at Changi Prison in the north east of Singapore.

“That was when I saw the first Japanese. A single Japanese standing by the side of the road watching us.”

Stephen was sent to Thailand with 150 others, where they were put to work building a railway to Burma on the Indian border.

The death railway Stephen was forced to work on

“I was in a hammer gang. The one that pinned the rail to the sleepers. We were getting practically no food. A cupful of rice a day and what leaves and things we could scavenge from the jungle. Every twenty to twenty-five miles we moved camp.”

“Some of the guards were reasonable,” said Stephen. “Some you could talk to in broken English and Japanese. Some of them used to give you a cigarette and others would knock it out of your hand.”

“Once we was spiking the rails down. The rain was coming down in buckets and a couple of times I missed my strike, the spike flew and hit me in the leg. Of course I swore. A Japanese sergeant came up to  me and whacked me across the back with a sword stick they carried. With that he took me up to where he had a tea brewed up and made me hold a pretty heavy stone over my head and put a bamboo stick between my knees. I stood there like that for half an hour. A Japanese officer came along and said: ‘What have you done wrong?’ I told him. The sergeant said: ‘Yes he was a lazy boy’. The officer told me to put it down and go and make myself some tea. As I walked away he was giving the sergeant a right going over.”

In monsoon season the barely sanitised camp became riddled with disease, from cholera to dengue fever.

“Once we had to go to a Tamil camp where they were lying around dead and chuck them in the lime pits and cover them. That was one of the chores. I only had to do it once as luck would have it. If our men got cholera they were taken out the edge of the jungle and buried there.”

“That was the only time I saw respect from the Japanese. If they saw one of our chaps buried they would let us use a Union Jack. And if one of the officers was coming past they would salute.”

In 1942 Stephen’s hammer crew caught up with the men charged with digging through and exploding chunks of the unstable hillside to make way for the new rails to be laid. ‘Hellfire Pass’ was so called because the prisoners worked eighteen-hour shifts by torchlight and wood fires, which looked from above like the jaws of hell.

“They went round the hospitals and ordered most of them out. Carried them out on the stretchers, they had to bore holes for the dynamite. More of them came back dead.”

Stephen’s friend Bhuie receiving treatement after he was half-starved as a P.O.W

Stephen was now severely underweight at a skeletal six stone and was one of just 32 of his company who had survived as the allied forces closed the net on the Japanese.

He was moved to the infamous Mitsushima mountain camp. In the trials that followed the Japanese surrender, more guards from Mitsushima were convicted and executed than from any other prison.

The men were put to work constructing a hydro-electric dam, dodging perilous rock-falls which collapsed entire villages, when they saw that memorable cloud mushroom on the horizon.

“We didn’t know what it was of course,” said Stephen. “Then the guards disappeared. A day or two later one of the Japanese civilian guards threw a paper over the wall. A sergeant from the RAF could read Japanese. He read they had dropped the bomb.”

Ten days later, Stephen was on a train passing the devastated city. “It was flattened,” he said. “Absolutely flattened except for one or two chimney stacks and the train tracks we were on. Looking out the window you could see all the devastation.”

A long journey home led him finally to his family, but after so long without them, training his mind not to think of them, he found he had nothing to say. “Just ‘hello’, that sort of thing and that was it. They didn’t ask, so I didn’t tell,” said Stephen.

It was only at work in Borough post office that he was surrounded by other PoWs who all swapped stories.

Speaking to the News this week, his daughter Linda, said her dad was a “quiet and private man” who never spoke to the family about his ordeal.

“I’m so glad Dad got to tell his story through your newspaper in 2004 (a year before he died aged 89 from ill health) and again this year for the 70th anniversary of VJ day.”