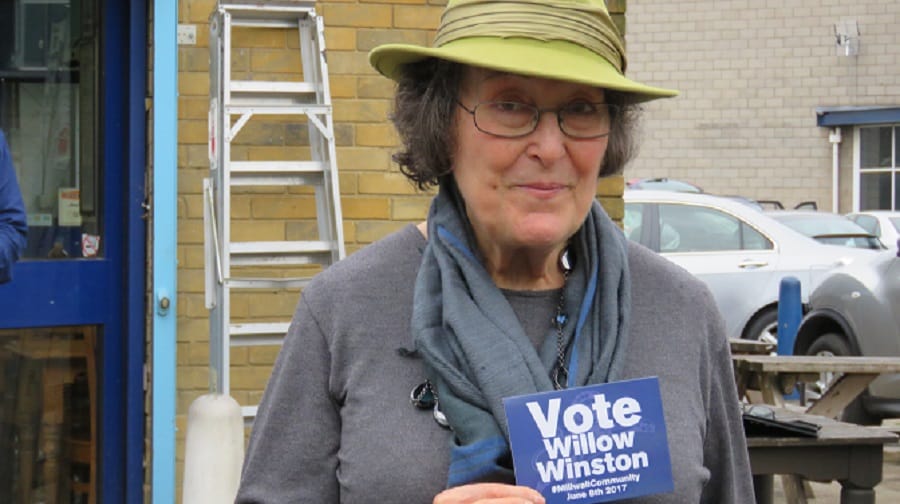 Willow Winston, who stood as an independent in Lewisham East with the backing of the Association of Millwall Supporters (Credit: Chiara Giordano)

The 72-year-old artist standing as a pro-Millwall candidate in the general election vowed she would fight to get compulsory purchase law changed if elected.

Willow Winston, an artist living and working next to Millwall’s stadium, the Den, will fight for the Lewisham East seat as an independent in the general election on June 8.

The determined artist has the backing of the Association of Millwall Supporters group, which has launched its ‘Millwall Community’ campaign, promising to “send a message to those sitting in Westminster”.

For the last six years, Ms Winston has faced the threat of losing both her home of sixteen years, which overlooks the Den, and her workshop to Renewal’s ‘New Bermondsey’ development.

She made a name for herself by speaking out at Lewisham Council meetings when the council sought to compulsory purchase land used by Millwall for its café, community trust, and youth academy, to sell to Renewal as part of a 2,400-home development around the club.

Willow Winston answers questions from the press and public with Nick Hart, of Millwall AMS, at Millwall cafe

The artist, whose mother Ruth Winston-Fox MBE was the first lady mayor of Southgate, has said she would be “very much involved” in the law concerning compulsory purchase, and would stand up for anyone who wasn’t being heard.

“I’m standing to be able to speak for anyone who’s being mistreated and is not being heard or represented,” she told a crowd gathered at Millwall’s café. “That’s what I would do if I got to parliament.

“Any question of using the compulsory purchase order as a tool for regeneration needs to be mostly done away with. There are a few occasions when it might be necessary but in this case it is not going to be used to build a hospital it’s to do with private housing.

“I would be very much involved in the law concerning the CPO, I would want to have it changed.”

Ms Winston is up against former shadow health secretary Heidi Alexander, who was Labour MP for Lewisham East from 2010-2017, and who was also Lewisham’s deputy mayor and cabinet member for regeneration from 2006-2010.

“Heidi Alexander worked as deputy mayor to Mr Bullock [mayor of Lewisham] when they [Renewal] were submitting the plans,” said Ms Winston. “When the plans were based on the idea that a CPO could be used almost as the first weapon and not as a last resort.

“Theresa May has said that the laws on CPOs  will be made even more lax than they already are so please let’s stand up for our roots with this one at least – we have to make sure that that doesn’t happen.”

If elected, Ms Winston said she would also be keen on education issues.

“If I got to parliament of course I would do my best to be the best sort of MP for the locality,” she said. “I would be very keen on any questions dealing with education because I see it as always being mucked around and pushed about.”

Nick Hart, from the Association of Millwall Supporters, said Ms Winston standing in the election was not “some tactic”.

“We are offering a choice,” he said. “I see this as a chance for football fans to support this campaign and send a message to those sitting in Westminster.

“It’s an opportunity for Willow to stand and make her case and for us to defend this football club.

“We see this as a first step and the real target will come in 2018. We will look at who voted against us and will look to set up candidates against them.”

The full list of candidates standing in Lewisham East is: