Up to 44 cars an hour would be affected by the move if approved, TfL estimates 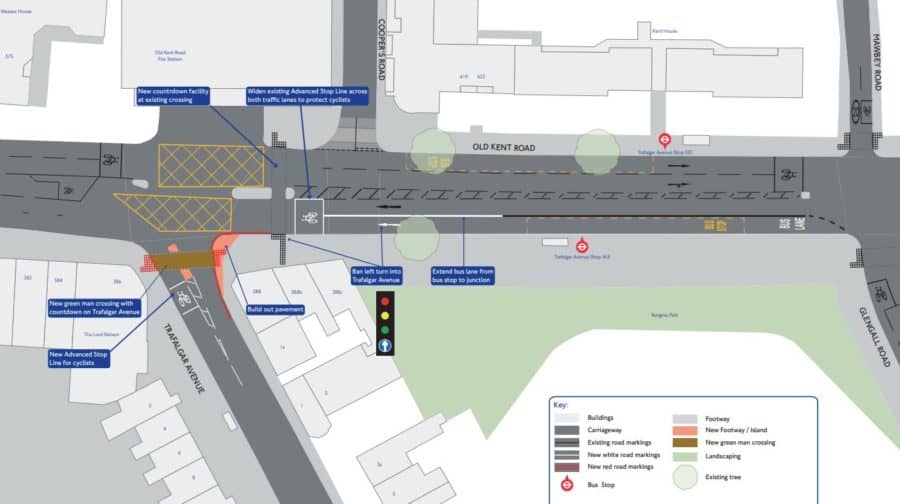 A map of the proposed plans which are currently open for consultation (Image: TfL)

TfL is proposing banning the left-hand turn out of the Old Kent Road into nearby Trafalgar Avenue towards the Bricklayers Arms.

Up to 44 cars an hour could be affected by the move affecting westbound traffic, as TfL plans to make a number of safety changes to the junction.

According to a letter sent to locals by the transport agency, details include a new ‘green man’ crossing at the junction and an extended westbound bus lane.

The changes form part of TfL’s and the Mayor’s bid completely to eliminate deaths and serious injuries on London’s roads by 2041.

The plans, announced last week, are up for consultation until August 12.

Full details can be found on the TfL website here and by searching ‘Proposed improvements to Trafalgar Avenue junction with A2 Old Kent Road.’

The plans come as major work is ongoing on the borough’s Jamaica Road in Bermondsey, to construct the Cycleway 4 route.

New crossings will be created on the major thoroughfare and also on Tooley Street once the work is complete, while the Rotherhithe roundabout will also be overhauled.

However motorists are warned to expect delays in the area until completion in April next year, as Tooley St and Jamaica Road are reduced to one lane in each direction.

These thick cunts wont be happy until London is one big car park. The hatred these pricks show towards motorists is sickening. All for these wanky cyclists, most of whom should never be allowed a road.

TFL yet again proposing changes that will cause more congestion and pollution . Those cars will just have to find a longer way around . They could not organise a tea party