Proposed Rotherhithe cycle superhighway “would be final nail in the coffin” 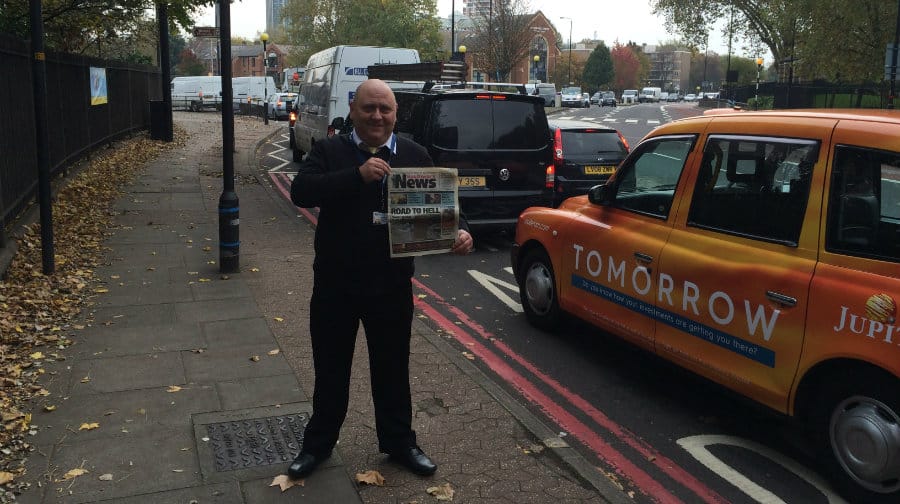 Dave Marks in front of Rotherhithe traffic, holding a copy of the Southwark News detailing his 2013 protest.

Rotherhithe workers have slammed the worsening traffic problems in the peninsula – and fear that the proposed cycle superhighway will make the situation even worse.

While details will not be confirmed until after a consultation period next spring, it is expected that the route will include Jamaica Road, Lower Road and the roundabout by the Rotherhithe tunnel – a notorious traffic blackspot.

Dave Marks, of Downtown Cars cab service, has previously protested against the “absolutely awful” traffic problems in the area, and fears the construction of a cycle superhighway and redevelopment of the roundabout will cause “chaos.”

Dave, pictured with a 2013 copy of the News detailing his protest, said: “Two years ago I was complaining and now we’re still in the same position. The cycle superhighway would cause chaos – it’s already terrible out there and it’s only going to get worse.

“If you drive through central London you can already see the negative effect the super highway has had on London.  Time and time I have oversees visitors in my cab who comment on how bad the traffic is compared to five years back.

“As cab drivers we face a lot of high running costs and stiff competition from big tech companies – the cycle superhighway just puts another nail in the coffin.”

Simon Dyer, of FA Albin and Sons funeral directors, which is located overlooking the roundabout in Culling Road, echoed these worries.

He said: “It starts getting bad at 3pm, when the traffic backs up Jamaica Road as far as Abbey Street and up Lower Road as far as the swimming baths.

“For us as a business it’s bad. Getting out is slow and coming back takes ages. We’re a local business and we’ve been here a long time and the traffic is just getting worse and worse. I’ve been here most of my life and I’ve never seen it this bad.”

He urged TfL to “look for ways to reduce the impact” of the cycle superhighway.

A spokesperson for TfL said they were “still working with the relevant boroughs to develop proposals” on the route, and would hold a consultation next spring.

Councillor Darren Merrill, Southwark Cabinet member for environment and public realm, said the cycle superhighway “presents an opportunity to address a number of concerns as well as to provide a safer environment for cyclists.”

He added: “Crossing facilities for pedestrians will be significantly improved along the route and bus priority will be maintained. Changes at the Rotherhithe roundabout are also covered by CS4 and this is key to reducing congestion on Jamaica Road and adjacent local streets.”

Simon Albin is worried about the effect the proposed cycle route would have on the already-clogged Rotherhithe roads.

You know what would improve congestion? If some of those people in cars and taxis got out and cycled instead. I drive regularly in (and out of) Rotherhithe, and I take public transport, and I occasionally take a taxi (including a Downtown Cars minicab), and I fully support the cycle superhighway.

The irony of someone who drives through the centre of a major capital city bemoaning the traffic in the centre of that capital city. The only thing that is going to reduce traffic is getting people out of cars and either walking, cycling or taking public transport. That’s it. There is no other option. More bike means fewer cars, it really is that simple. Dave, you are barking up the wrong tree.

Unfortunately for Messrs Marks & Albin, walking, cycling or using public transport is hardly an option. Call for a cab and the chap at the other end of the line offers to give you a piggy back to your destination? And one can hardly expect the deceased to be delivered to the cemetery via the P13 bus.