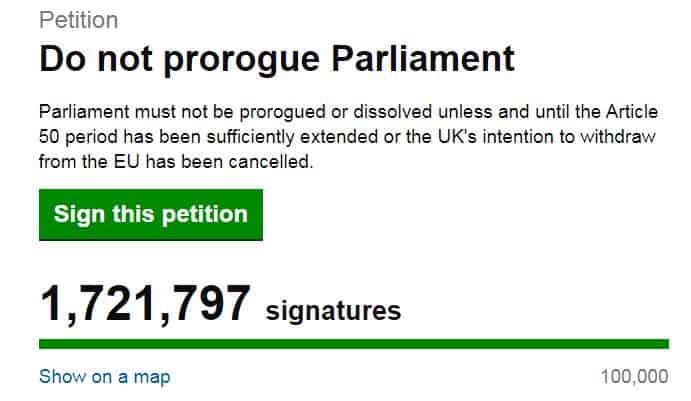 Over 1.7million had signed the petition nationally but this week has seen a bitter row over the decision to suspend Parliament

Nearly 23,000 residents across Southwark’s three Parliamentary constituencies had signed a petition urging the Government not to suspend Parliament by Tuesday, the day Parliament was prorogued.

“Parliament must not be prorogued or dissolved unless and until the Article 50 period has been sufficiently extended or the UK’s intention to withdraw from the EU has been cancelled,” states the petition.

The highest amount of signatures came from Helen Hayes’s seat of Dulwich and West Norwood, which garnered 7,540 signatures against the idea of suspending Parliament.

Neil Coyle’s Bermondsey and Old Southwark seat saw over 6,900 signing the petition, while just over 7,000 signed it in Harriet Harman’s neighbouring constituency of Camberwell and Peckham.

Despite the petition gaining over 1.7million signatures nationally, and angry scenes among MPs in the Commons, Parliament was suspended.

However the Government responded on Monday night, minutes before the suspension, that prorogation and a general election was needed for Prime Minister Boris Johnson to have a clear mandate in the Brexit negotiations.

“Prorogation is a prerogative Act of the Crown, exercised on the advice of Ministers,” said the Government in its response.

“We must respect the referendum result and the UK will be leaving the EU on 31 October whatever the circumstances.”

The suspension will last until October 14. It comes after MPs also successfully passed a bill which would require Boris Johnson to ask the EU for an Article 50 extension to the current Brexit deadline of October 31.

Parliamentarians also blocked Mr Johnson from holding a snap general election in October, with MPs Helen Hayes and Harriet Harman not having a vote recorded – so thought to have abstained, on Monday’s motion, and Neil Coyle voting against.

The petition can be found here.