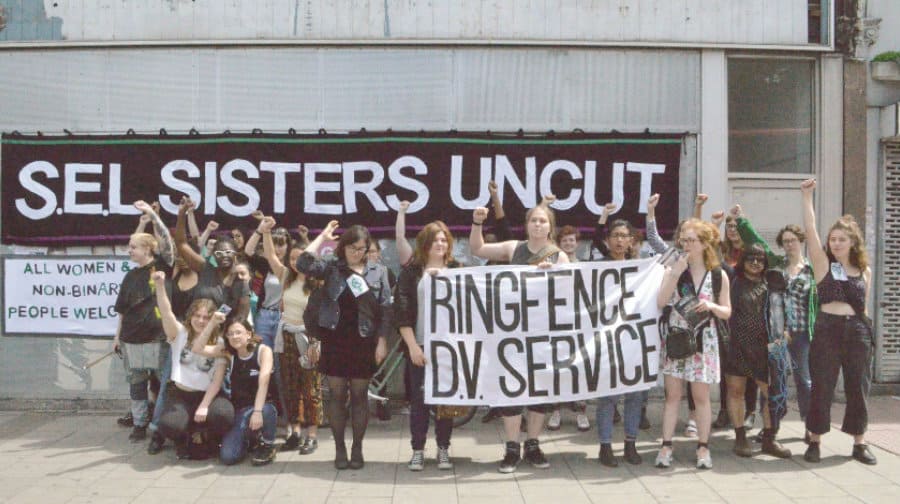 Almost half of domestic violence survivors are not rehoused when they approach Southwark Council for help, campaigners claimed this week, as they occupied a building in Peckham to highlight the issue, Emma Finamore writes…

South East London Sisters Uncut – a feminist group taking action against cuts to domestic violence services – staged a demonstration on Peckham’s Rye Lane on Sunday, protesting against the council’s policies, and took over a vacant shop to use as a base for activities.  Southwark’s housing allocations policy gives no priority to women who have been made homeless due to domestic violence, the group claimed, meaning they can potentially be trapped in temporary accommodation for months or years.

Kate Fields, 25, a domestic violence support worker taking part in the action, said: “We’re launching the campaign because we’re sick of Southwark Council failing survivors of domestic violence. In May, we heard about a woman being told by housing officers to go back home to her abusive partner because they didn’t believe that she or her children would be at risk. We know she’s not the only survivor facing this treatment when 47% of people who approach Southwark after being made homeless due to domestic violence are turned away with no help.”

Local resident, Tasha Fox, joined the demonstration on Sunday. She said: “I’m taking part because I wanted to make my voice heard on this issue. Southwark Council has a duty to help victims of domestic violence find safe homes and they are failing to do so.”

Councillor Anood Al-Samerai, leader of Southwark Liberal Democrat Council Group, said that she planned formally to address the issue next month. “Liberal Democrat councillors are extremely concerned about why so many victims of domestic violence are not being accepted onto the housing list by the council,” she said. “My formal question to the Council Leader in July is about this very issue and we will continue to do all that we can to help and support women and children in extremely vulnerable and dangerous situations.”

Ccouncillor Stephanie Cryan, cabinet member for housing, defended the council’s record: “We work alongside Southwark Advocacy and Support Service (SASS), delivered by Solace Women’s Aid, to support victims by helping them into temporary accommodation or providing sanctuary and security measures which allow them to stay in their own homes. Statistics alone do not give the whole picture – we aim to reduce the risk of harm to a person in a wide-ranging, varied and bespoke way, not just by looking at their housing situation and moving someone away, which doesn’t always resolve the issue. All housing applications are assessed according to the person’s circumstances. Housing is in extremely high demand and vulnerable women who have children or are pregnant are prioritised. We will continue to support all victims of domestic abuse in ways proven to be successful using the experience we have gained in years of tackling this emotive issue.”

The group has planned a week of activity from its temporary base at 285 Rye Lane, Peckham, including talks and workshops about domestic violence and housing, films and craft activities. It also wants to create a “welcoming space” for all members of the community.