Protest over plans to turn rug warehouse into 15-storey block 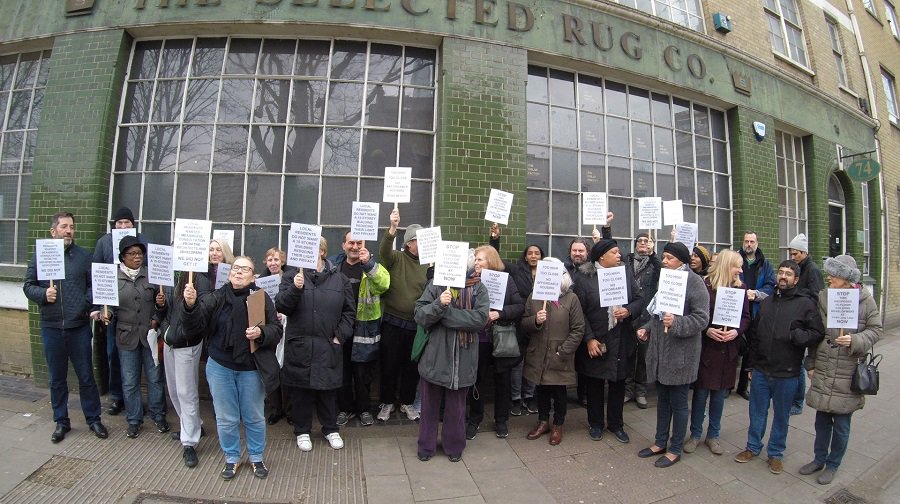 Residents took part in a demonstration against plans to build a 15-storey 'co-living' development in Long Lane (Credit: Lynsey Marshall)

Residents opposing plans to turn a former rug warehouse into a fifteen-storey ‘co-living’ development turned out for a public demonstration.

Spaces has submitted plans to demolish the old Selected Rug & Matting building in Long Lane and replace it with a high-rise housing block.

But residents living nearby fear the size of the development will affect their privacy, lead to a loss of light, and cause noise disturbance.

Initially, the proposal was for 172 rooms before Spaces scaled it back to 170 – although residents say this is not enough.

Terry Weston, a representative of nearby Empire Square residents’ association, set up a paper petition which has attracted almost 300 signatures, and an online petition signed by 50 people.

Residents also held a demonstration outside the site on Saturday, January 13, which was attended by Chaucer ward councillors Helen Dennis and Vijay Luthra.

Ms Weston told the News the development would “affect so many people”.

“The concern is what it will be like living next door to it because fifteen storeys is very high and the highest building is seven floors in the immediate area,” said the 71-year-old.

“There will be a loss of sunlight and the windows will be very near so residents will have loss of privacy and lots of the flats only have two windows looking out so they will just be looking at a building.

“The developers have moved it slightly back but they haven’t really reduced the number of rooms and potentially you could have double that number because it will be double beds throughout. How the development could look

“It’s also the noise; we have a lot of key workers living in the area and many of them have to sleep during the day and there are a lot of outside terraces [in the plans] so in the summer it’s going to be unbearable.”

“We’ve got no objection to the site being redeveloped – I think people would have accepted it if it was seven storeys.”

The milliner, who has lived in the area for 43 years, said residents also objected to the lack of affordable housing – and that co-living “has not been tested in the borough”.

A spokesperson for Spaces said a number of changes had been made as a result of consultation.

“Co-living is a tried and tested concept in major cities around the world,” they said. “This is one of the first of its kind in Central London and Spaces Co-Living seeks to deliver a great living experience in a well-connected wider community – it is unique to the London Borough of Southwark.”

“Throughout this process, we maintained a website which provided information about the consultation process, including contact details if anyone had any queries.

“The development will provide a contribution to affordable housing.  We are currently in negotiations with LB Southwark about a financial contribution that would be used to fund their ambitious programme to deliver new affordable homes in the borough.”

The plans can be viewed and commented on by visiting http://planbuild.southwark.gov.uk:8190/online-applications/ and searching for 17/AP/2122.

that’s a lovely building. why not keep it and develop for flats?